UNDERSTANDING THE SCIENCE CAN HELP FACILITY EXECUTIVES REALIZE THE BENEFITS OF COOL ROOFS, EVEN IN SEASONAL CLIMATES

While cool roofing remains a hot industry trend, the science behind cool roofs, properties such as infrared emissivity and solar reflectance, isn’t exactly first on the minds of facility executives researching roofing options.

To most, cool roofing is a cut-and dry issue: Roofing systems that reflect the sun’s rays can save energy, and thus money, in warm climates year round and during hot summer months in more seasonal climates. However, less clear and more controversial is whether cool roofing is beneficial in climates where, over the course of a year, heating energy loads dominate cooling. In other words, can cool roofs be advantageous in cold climates?

The answer to that question begins with a more complete picture of how a cool roof functions. “A cool roof is a roof that combines reflectivity and infrared emittance to keep the roof temperature cool,” says Andre Desjarlais, program manager for the Building Envelope research program at the U.S. Department of Energy’s Oak Ridge National Laboratory. Reflectivity is a measure of the percentage of solar radiation that is reflected when it strikes the roof surface. Infrared emittance, or emissivity, is a measure of the amount of remaining solar radiation that is released from the roof surface to the sky.

Solar radiation is made up of three forms of energy: about 5 percent ultraviolet, 45 percent visible light, and 50 percent infrared. When that energy strikes a roof, it is dealt with in several ways. For cool roofs, the largest portion is reflected, but energy is also emitted as infrared energy to the atmosphere. The energy that is absorbed and converted to heat is transferred through convection with the air directly above the surface, and the remaining heat is conducted into the building.

The combination of high reflectivity, usually a result of light-colored or white surfaces, and high emissivity during hot summer months results in a surface temperature sometimes as much as 60 to 70 degrees cooler than a non-reflective roof. With less net heat energy to deal with, the air conditioning system doesn’t have to work as hard to keep the building at a comfortable temperature.

While the reflective and emissive properties of a roof are most important for its coolness, other factors such as insulation, roof orientation and roof pitch contribute to a building’s overall thermal efficiency. “Building owners should never agree to a roof based solely on the fact that it’s a white roof,” says Jared Blum, president of the Polyisocyanurate Manufacturers Association and a board member of the Solar Smart Roof Alliance.

Some of the long-term performance issues of roof selection should also be considered, including maintenance costs, such as power washing or recoating, that might be necessary to keep the roof performing as it did when it was initially installed. Another consideration is a roof’s longterm ability to match functionality with aesthetics.

But even if the roof is kept in mint condition, the question remains of whether the cool roof will be a thermal detriment in a heating-dominated climate.

“The ideal roof would be 100 percent reflective in the summer and 100 percent absorbent in the winter,” says Art Rosenfeld, California Energy Commissioner. Unfortunately, a roof can’t change its reflective and emissive properties, so the general energy efficiency of a cool roof must be assessed by comparing the energy saved during the hot summer months to the energy consumed, or the “heating penalty,” during the heating season.

SKEPTICS OF THE ENERGY BENEFITS OF COOL ROOFS

Skeptics of the energy benefits of cool roofs postulate that in cold climates, such as Minneapolis or Chicago, where heating degree-days vastly outnumber cooling degree-days, the heating penalty would be severe enough to render a cool roof counterproductive.

This use was the impetus behind their inclusion as variables in the development of calculators that predict how much energy and, by extension, how much money per square foot would be saved with the use of cool roofs vs. non-reflective roofs in specific locations. The calculators, developed separately by the U.S. Environmental Protection Agency and the Department of Energy’s Oak Ridge National Laboratory, allow users to enter the thermal properties of the proposed roof, amount of insulation, cost of energy and efficiency of the building’s HVAC systems, among other things.

The calculators are not meant to be precise indicators of specific building performance. Rather, they help give a general indication of how certain roofing materials with specific thermal properties will perform in various parts of the country. In other words, they can help settle the argument, from strictly an energy usage and monetary perspective, whether cool roofs can be beneficial in cold climates. In many cases, even in the cold climates, the calculators still yield a yearly net savings for using cool roofs. There are at least five reasons why the heating penalty in the winter time isn’t nearly as severe as it could be and why the summer cooling savings, to some degree, are able to counteract the winter heating penalty in cold climates:

1. During the winter, the solar angle is lower so reflectivity and absorption aren’t as important. Reflectivity and absorption are more critical during the summer when the sun is higher in the sky and solar radiation is hitting the roof directly.
2. The days during winter months are shorter so less total energy is hitting the roof to be absorbed or reflected over the same period of time as during the summer.
3. The ratio of cloudy to sunny days increases during the winter, so again, not as much solar energy is striking the roof.
4. Snow piled up on the roof during parts of the winter reflects the sun’s energy. Therefore, it doesn’t matter how reflective or absorbent the roof is.
5. In many cases, resources cheaper than electricity, such as natural gas or oil, are used to heat buildings in the winter. Still, in far northern climates like Chicago, the actual savings, strictly in terms of energy use, if any, might be fairly minor, says Desjarlais.

COOL ROOFS IN SEASONAL CLIMATES CAN BE BENEFICIAL FOR OTHER REASON

The debate doesn’t end there, though, as cool roofs in seasonal climates can be beneficial for other reasons. That’s because cool roofs can have more impact on energy costs than energy use. Cool roofs cut energy use during peak demand times during summer when rates are highest. What’s more, cool roofs can help reduce the demand charge that a facility pays all year on the basis of its greatest energy use. Additionally, some northern utility companies offer rebates and incentives for tactics like cool roofs that help facilities cut down on the peak demand load. The idea is to help ensure that there will be enough energy to go around, thus avoiding brownouts.

“The peak demand benefits of cool roofing are the same no matter how far north you march,” says Desjarlais.  “Why would utility companies offer incentives in cold climates if there wasn’t a benefit?” asks Scott Kriner, technical director of the Metal Construction Association and chairman of the Cool Metal Roofing Coalition.

“The only building that won’t benefit from a cool roof energy-wise is one that’s not air-conditioned,” says Hashem Akbari, staff scientist and group leader for Lawrence Berkeley National Laboratory’s Heat Island Group.

Because of the lower roof surface temperature on roofs with a high emissivity and high reflectivity, urban heat islands can be reduced with widespread use of cool roofs. This is true even in cities with seasonal climates. A study performed by Akbari and his team in Toronto shows that if heat island- reducing measures, including cool roofs, were adopted widely, the city could save more than $10 million a year on energy costs.

On a national level, widespread adoption of cool roofs, independent of other mitigation measures, could save close to $750 million in energy costs in major urban areas, LBNL estimates.

“It’s a collective thing for building owners,” says Greg Crawford, executive director of the Cool Metal Roofing Coalition. “If several buildings begin installing reflective roofs, it will lower the temperature of the urban area and reduce the natural load on building systems.” 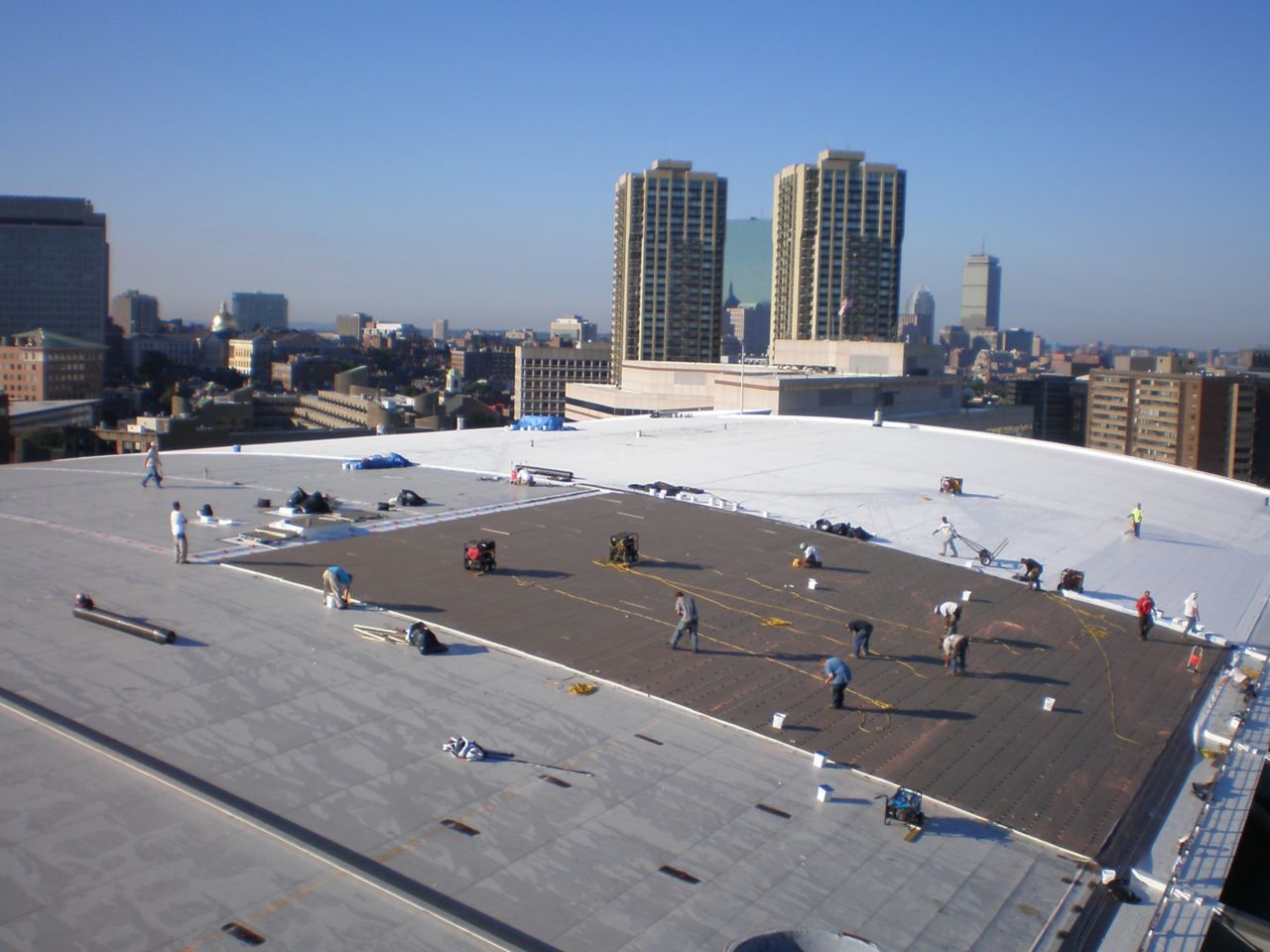 In a two-year scientific study commissioned by the U.S. Department of Energy (DOE) and the Environmental Protection Agency (EPA), researchers set out to monitor and verify air conditioning savings and peak electrical demand reduction when replacing a black EPDM roof with a white thermoplastic Sarnafil roof at a 100,000 square foot retail establishment in Austin, TX. Before and after testing conservatively estimate the building owner will save up to $71,000 (present value) in abated energy costs. A comprehensive report on this study is available. Call or email Sarnafil for a copy of the report and to learn how an EnergySmart Roof from Sarnafil can save you money.