The American Airlines Center has something for everyone. It’s the new home of the Dallas Stars and the Dallas Mavericks, and is the host of concerts and family shows like Disney on Ice, the Harlem Globetrotters and the Ringling Brothers and Barnum & Bailey Circus.

And topping all this entertainment is a roof manufactured by Sarnafil and installed by King of Texas Roofing Company.

King of Texas and Austin Commercial, the general contractor, worked together for a year to develop the specifications of the roof. The design called for 200,000 square feet of barrel-shaped roofs joined at right angles to one another.

According to Nelson Braddy, president of King of Texas, the building developer was looking for a long-term solution for the roof. “The cost of putting this on and the logistics of getting up there and having to replace it were very challenging, so they didn’t want something that was going to have to be replaced in ten years.”

The roof also had to be able to withstand the severe weather conditions in Dallas. And because the roof is visible from the ground, it had to be aesthetically pleasing. Sarnafil’s G410 adhered roofing system fit the bill on all counts.

Sarnafil’s custom colors allowed the builders to choose an attractive tan roof with the red, white, blue and silver American Airlines logo. “The color is a good match with the Indiana Limestone and GFRC (a fiberglass and concrete material that can be made to look like limestone) used in the exterior facade design,” says Joe Laakman, vice president of HKS, the architectural firm for the project. “The single-ply system was optimal to conform to the varying slopes of the roof.”

Two major challenges King of Texas faced were getting the materials up on the roof and keeping the workers safe. To keep the materials from falling off the roof, King of Texas built level platforms on the slopes. To keep the workers safe while giving them the freedom to move around, they developed a restraint system consisting of a series of cables and retractable devices hooked into a metal box. Like a car seatbelt, the cable would lock if the worker moved too quickly, but the worker could slowly pull the cable out of the box in order to move around.

Once the safety issues were taken care of, King of Texas got to work. They installed batt insulation in the metal acoustical deck, then mechanically attached two layers of Sarnatherm polyisocyanurate insulation and a layer of Dens-Deck® to the steel deck. According to Braddy, “the Sarnafil membrane was adhered directly to the Dens-Deck for increased fire rating.” 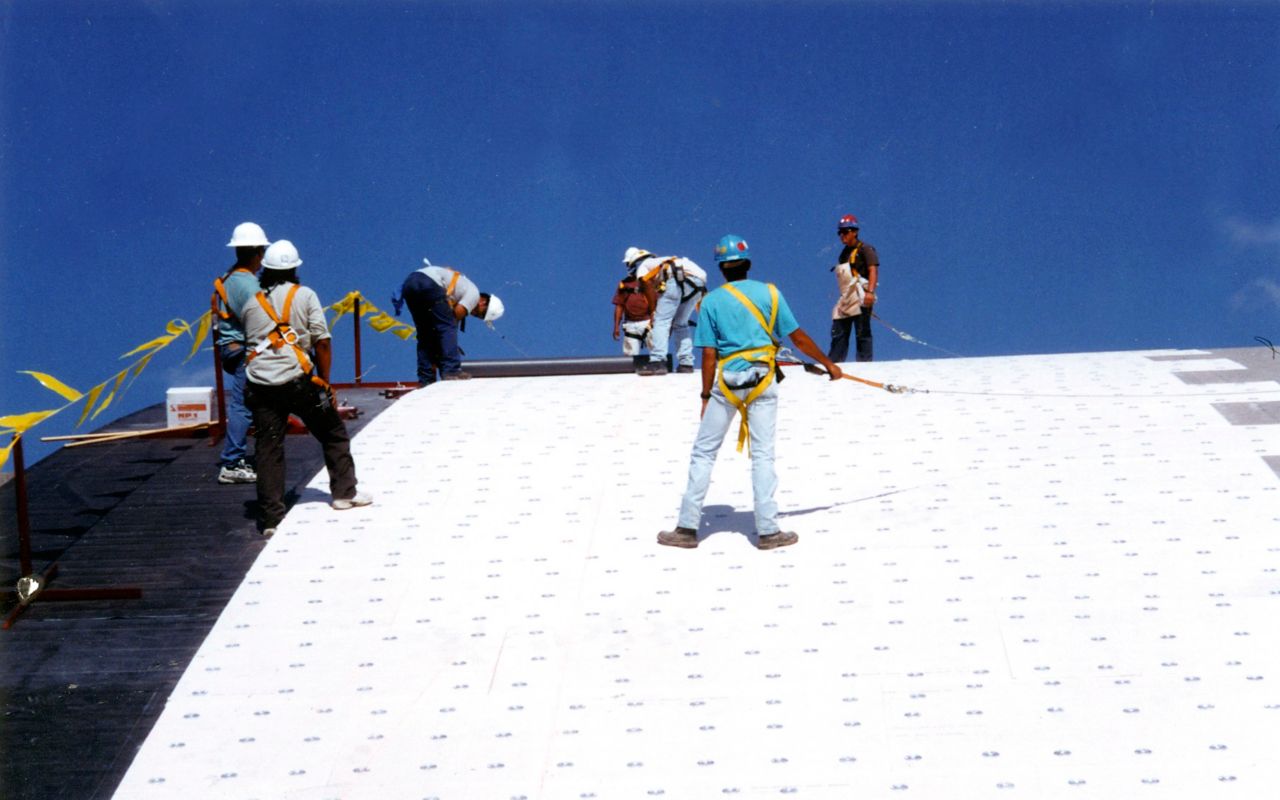 The flat areas at the bottom of the slopes were made watertight with Sarnafil waterproofing membrane and then topped with six inches of concrete for extra protection. “Probably the most critical area of the entire job was tying the waterproofing system into the roofing system and making sure it was all watertight before the concrete was poured,” says Braddy. To ensure complete watertightness, King of Texas flood tested the flat areas before the concrete was added. “We plugged up the drains, filled up the area with water, and let it sit for 48 hours to make sure there were no leaks,” says Braddy. Adds Laakman, “Sarnafil has an 80 mil waterproofing membrane that provided the performance and security the design team and ownership were looking for.”

Next came the creation and installation of the American Airlines logo, which had to be not only attractive but also compatible with the roofing system. Once again, Sarnafil’s custom membrane colors met their needs.

To get the design exact, King of Texas had a copy of the logo produced on a thin vinyl film. After they arranged the 90-foot diameter graphic on the roof, project managers checked the positioning and size from a helicopter 2,000 feet above the arena.

With the design approved, Sarnafil produced custom membranes in exact color matches. From there, a graphic design company cut out all the pieces, creating the 13-foot long letters in several pieces. King of Texas tacked the pieces in place, and the project managers headed up in the helicopter for a final review.

With final sign-off in hand, King of Texas welded the logo membrane directly onto the roof. “The logo was the most fun thing about the job because we had never done anything like it before,” says Braddy.

The American Airlines Center, which is billed as the most elaborate and expensive sporting venue in the country, made its debut with an Eagles concert in the summer of 2001. The acts may come and go, but the attractive, quality Sarnafil roof will reverberate with the sounds of concerts and sporting events for years to come.

INTERESTED IN CUSTOM DESIGNS ON YOUR NEXT PROJECT? GET MORE INFORMATION: