It’s not often that a roof serves butterflies and basketball players, but the new roof at the Target Center in Minneapolis does both. That’s because the Target Center’s new green roof not only provides shelter to the National Basketball Association’s Minnesota Timberwolves and their fans, but it also features vegetation designed to attract the endangered Karner Blue Butterfly.

But attracting butterflies wasn’t the main reason the city of Minneapolis went with a green roof when it replaced the existing EDPM roof on the sports arena. “We had a problem in the city with sewer overflow problems, and every drop of water that went on the old roof went on to the sidewalk, into the sewer system and then into the Mississippi River,” said Minneapolis City Council member Lisa Goodman. The new green roof is designed to capture 0.9 inches of rain before run-off occurs, and is expected to prevent an estimated one million gallons of storm water from creating a combined sewer overflow problem and draining into the Mississippi River each year. “We thought it made sense for the city to lead by example with a green roof to address a portion of the citywide storm water issue,” Goodman remarked. 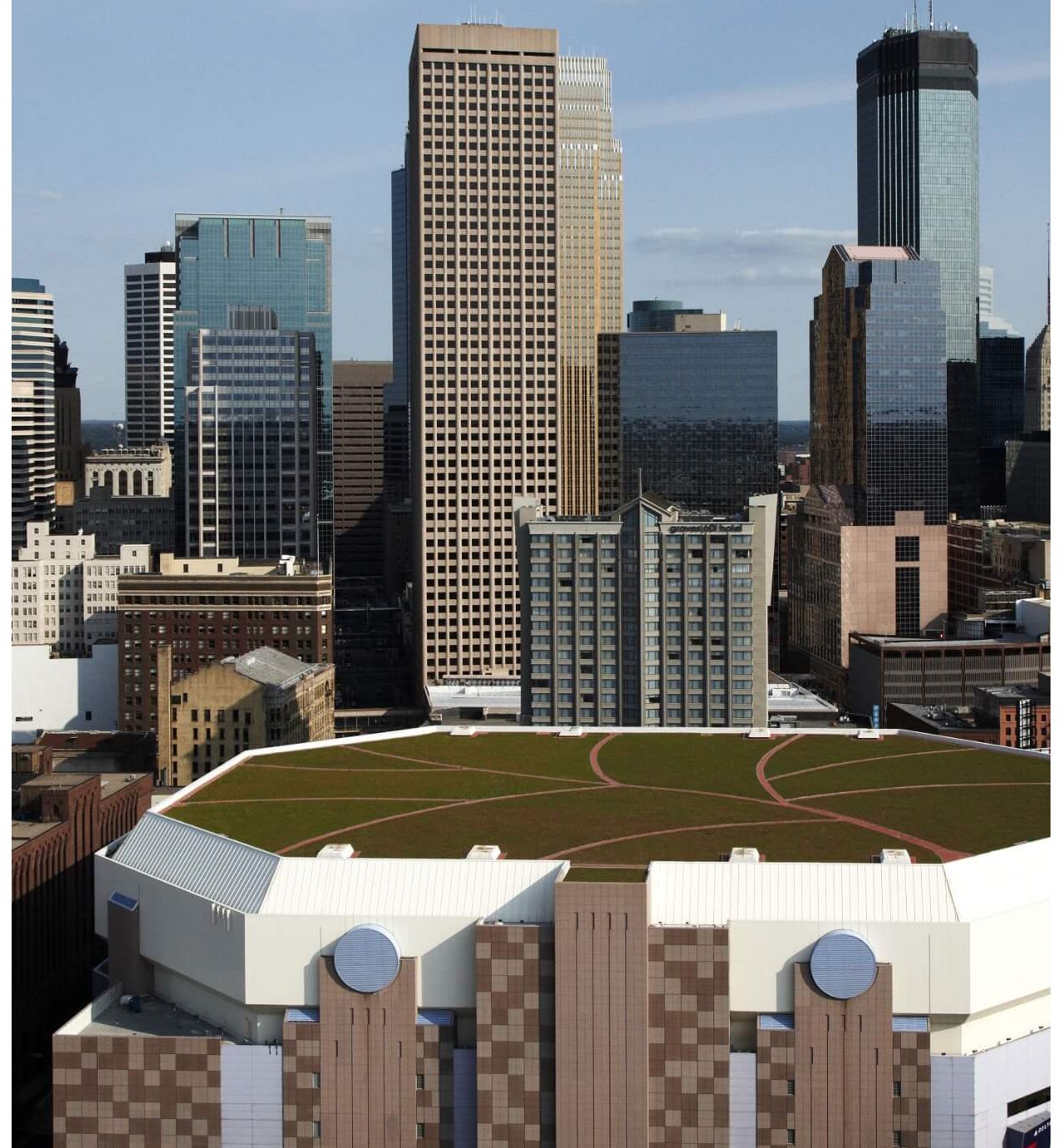 At 2.5 acres, the Target Center’s vegetated roof is the largest in Minnesota and the first green roof installed on a sports arena in North America. “When designing the new roof, we had to make sure that it did not weigh more than the previous ballasted EPDM roof and the existing loading limits,” said Michelle Murray, senior project manager at Inspec, Inc. of Minneapolis, roofing consultants on the design team. This team also included Leo A. Daly Architects and The Kestrel Design Group, both of Minneapolis. “A vegetated system over a lightweight waterproofing system met that challenge,” Murray explained.

Gary Patrick, executive vice president at Inspec, said that several different systems were considered during design, various polyvinyl chloride (PVC) roof membranes were specified, and the Sika Sarnafil waterproofing PVC membrane was chosen for the green portion of the roof. (Other roof areas were replaced with a white Sika Sarnafil ‘EnergySmart Roof’ PVC roofing membrane.) “We knew we needed a good membrane that could handle the effects of root growth, be resistant to bacteria, and handle varying hydrostatic pressures,” he explained. “The Sika Sarnafil waterproofing membrane would do all that, and its encapsulated reinforcement prevents moisture wicking at seam edges — another plus.”

Patrick remarked, “We have had a lot of experience with Sika Sarnafil PVC membrane in both roofing and waterproofing applications, and we really like the product and the hot-air welded seams.”

Murray added that Sika Sarnafil’s experience with the Electric Field Vector Mapping® system (EFVM®) was another big factor. When activated, the EFVM leak detection system identifies breaches through the use of low voltage electricity, eliminating the need to do flood testing which may have been problematic on this roof due to its physical characteristics. “Sika Sarnafil helped a great deal with educating us about the placement of the EFVM components within our system. This tool will save lots of time in detecting membrane breaches in the future, should any develop,” Murray stated.

When a roof has 29 different areas and is in the middle of a bustling downtown, there are bound to be installation challenges, and this roof was no exception. Rex Greenwald, project manager at Stock Roofing Company of Minneapolis, said one major challenge was doing the installation while the new Minnesota Twins baseball stadium was being constructed next door at the same time. “We had to carefully schedule freight and material because of the congested area,” said Greenwald. “We had 25 people working day and night, with much of the hauling of materials taking place at night.”

In addition, the installation had to work around the schedule of the Target Center, which remained operational during the installation. “There were 65 separate events that went on during construction,” said Patrick. “We couldn’t have any disruption to the performances and other building functions.”

Safety was another concern. Greenwald said that the site also featured some small roofs only five feet by eight feet in size that were 165 feet in the air, so roofing personnel had to work off of a lift and use harnesses.

GREEN PRACTICES IN PREPARATION FOR THE GREEN ROOF

Stock Roofing recycled “about 97 percent of the roofing products from the original roof,” Greenwald stated. That included 1,180 tons of rock and pavers and 60 truckloads of the existing roof insulation.

The Kestrel Design Group designed the vegetation on the roof, which consisted of a pre-grown mat of sedums and plants that are native to Minnesota. Lupines were also added to attract the Karner butterflies. “The goal was to enhance plant diversity and ecological resistance,” Patrick explained.

The teamwork between all the parties involved is one reason the installation went so smoothly. “Inspec is one of the best roofing consultants around,” Greenwald said. “They are very diligent and take a lot of care with the details.”

“Stock Roofing did a great job in meeting all the installation challenges and communicating with other team members,” Patrick stated. Added Goodman, “All the contractors involved were very committed to completing the project on time and on budget.”

Today the Target Center roof is scoring high in meeting everyone’s expectations. “This green roof is performing well and we look forward to working with Sika Sarnafil roof and waterproofing systems again in the future,” Murray said.

“Between this roof and the new, recently opened baseball stadium we have tripled the green space in that area of downtown,” Goodman stated. “Not only does this roof save us on storm water run-off, but it also reduces energy costs, since this roof doesn’t get nearly as hot as the old rock ballast roof. I think other cities could benefit from making their big arena roofs more sustainable.”

That’s something both butterflies and basketball players can applaud.