The Music City Center is not only a stunning new attraction for the city of Nashville, but is also a great example of sustainability. The convention and exhibit center, with its four-acre green roof, 845 solar panels, and 360,000 gallon rainwater collection tank (used for irrigation and to flush toilets) was designed to achieve a LEED® Silver Certification. In fact, it was awarded LEED Gold. It was also the winner of the 2013 Governor’s Environmental Stewardship Award in the Building Green category.

The 2.1 million square-foot Convention Center has a very unusual and eye-catching roof, which serves as a key design element. A portion of the roof is evocative of a musical instrument while the undulating vegetative portion of the roof mimics the rolling hills of Tennessee. Various types of sedum are planted on the roof that will change color with every season and capture rainwater on the roof.

“The Music City Center is a new landmark for Nashville that is designed to attract visitors and reflect the unique qualities of the community,” remarked Robert J. Svedberg, AIA and principal of tvsdesign of Atlanta, the architect for the project (along with Tuck-Hinton Architects and Moody-Nolan, Inc.). “Because the roof is such a large part of the building’s image, its appearance, attachment method, and detailing were unusually important, and played a big role in the roofing system we specified.”

NOBODY DOES IT BETTER

The roofing system installed on the Music City Center was the Sarnafil EnergySmart Roof in Light Gray. “I’ve been working with the Sarnafil roof for more than 10 years and it is the best PVC on the market,” said Andy Baker, vice president of Baker Roofing Company of Raleigh, North Carolina. “It has a reputation for long-term durability, and its roofs have outlasted almost every other type of roof out there.” He added that a Sarnafil membrane was also used as the waterproofing membrane under the vegetative roof, resulting in “one continuous system.” 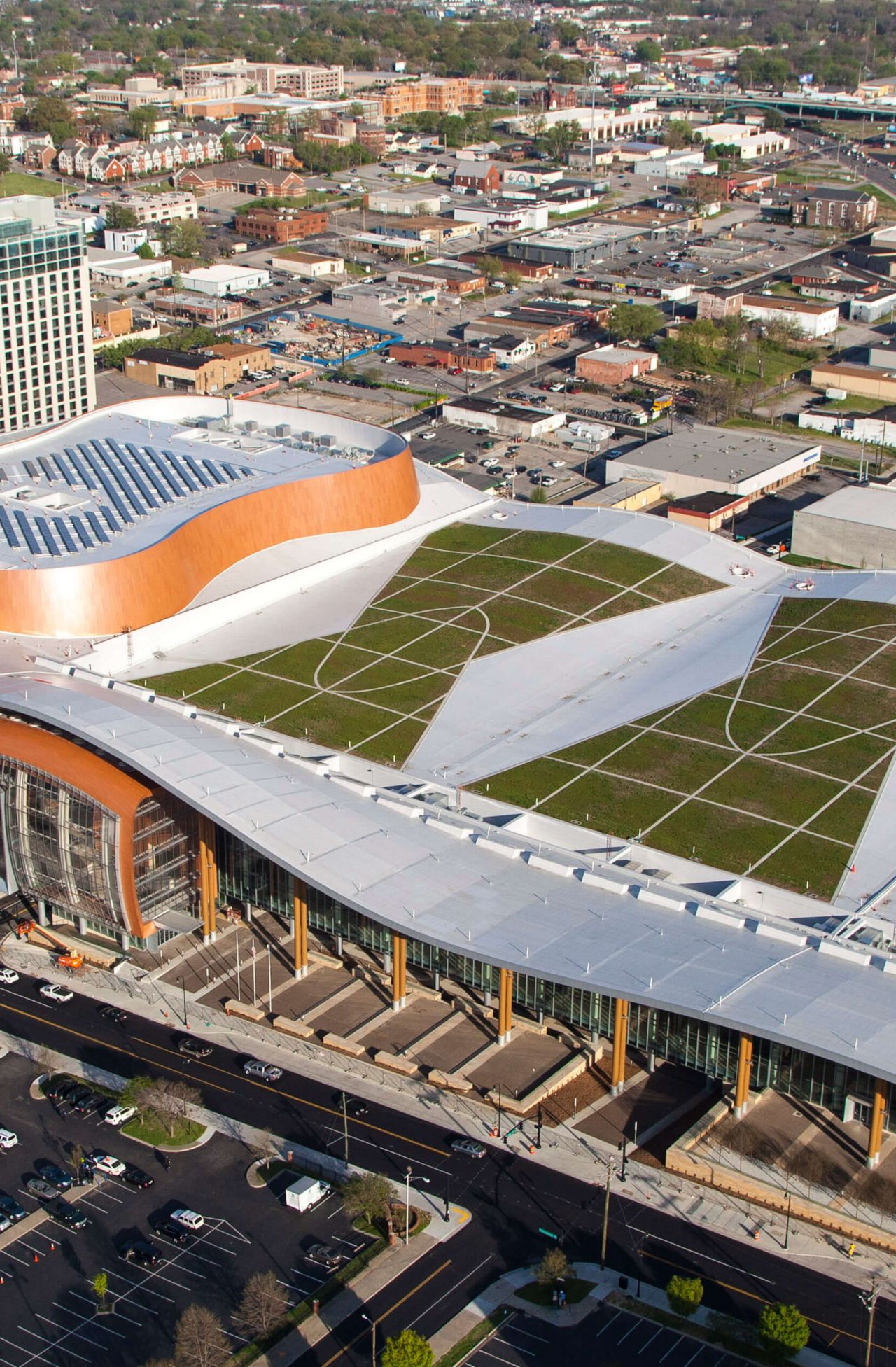 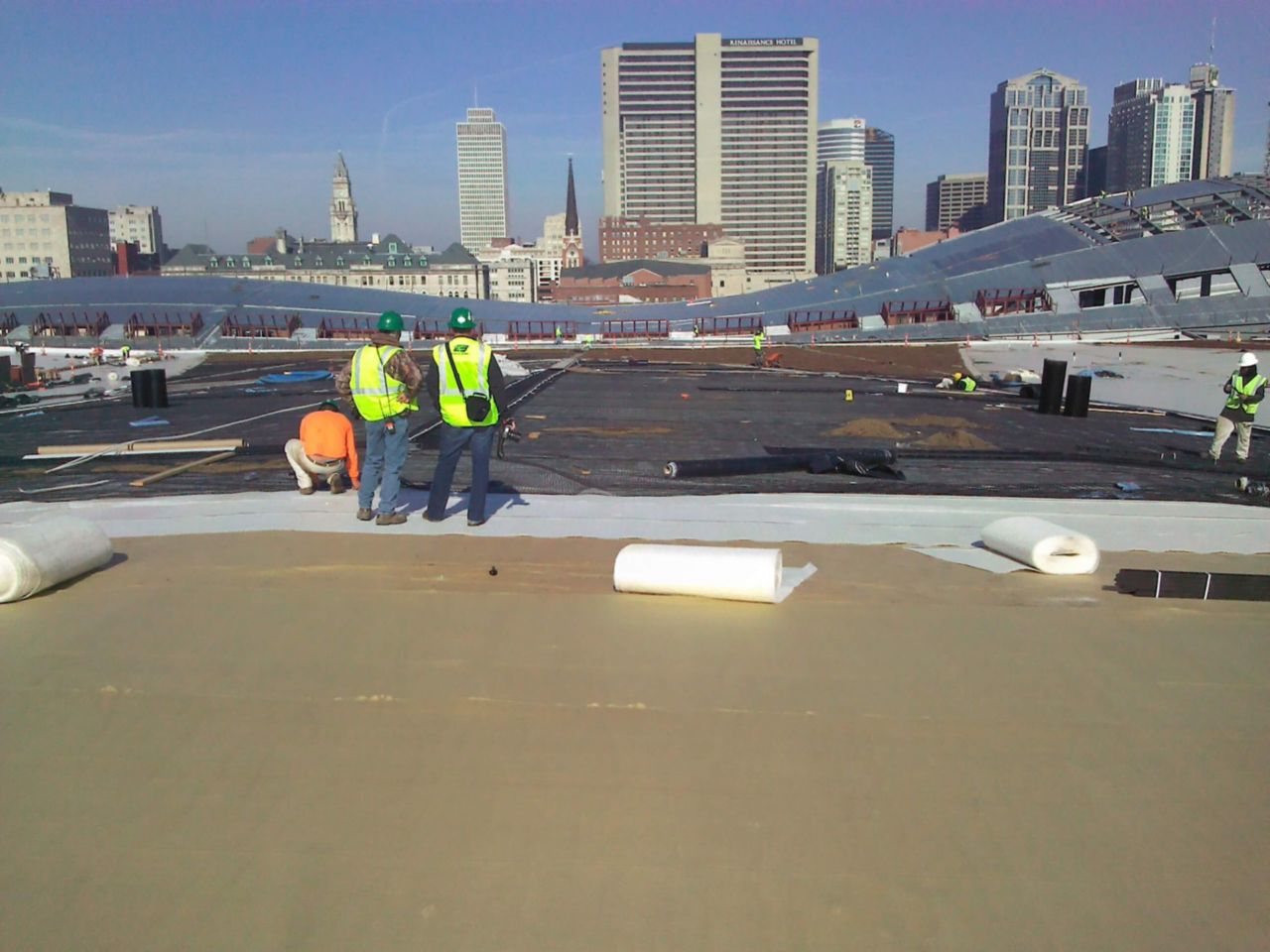 BLOWING IN THE WIND

As might be expected, installing a roof this large in the middle of a metropolitan area came with many challenges. The first was dealing with restrictions relating to on-site storage and parking. “This is in a downtown area with lots of traffic,” Baker explained. “We were unloading as many as 12 trucks a day in that environment and moving things up to the roof, which required a lot of strategic planning.”

Andy VanPelt, senior project manager for Clark Construction Group, LLC of Nashville said that safety was another concern — for all the trades. “There were lots of curves, undulations and severe slopes so we had to install rope lines and use harnesses. We also roped off designated areas that were accessible only to the roofing contractors,” he said.

“Safety was very important because of the different heights involved with this project,” Baker added. “We were working on walls that were 20, 30 and 40 feet high.”

Coordinating with all the trades working on the new construction site was another challenge. “Communication was key,” Baker stated. “We took part in daily meetings with the general contractor and other project supervisors, which were very helpful. We also had very good communication with the Sika representatives, especially regarding material delivery.”

After the roofing system was installed, the vegetated roof was put in place. “We used 14 different types of vegetation and chose succulent plants that are low maintenance,” said Mary Brette Clippard, marketing and public relations manager at Music City Center. “The green roof helps to reduce energy usage by absorbing heat and acting as an insulator while capturing rainwater. The light-colored Sarnafil membrane in the exposed roof areas also reflects UV rays, keeping the building cooler in the summer.” 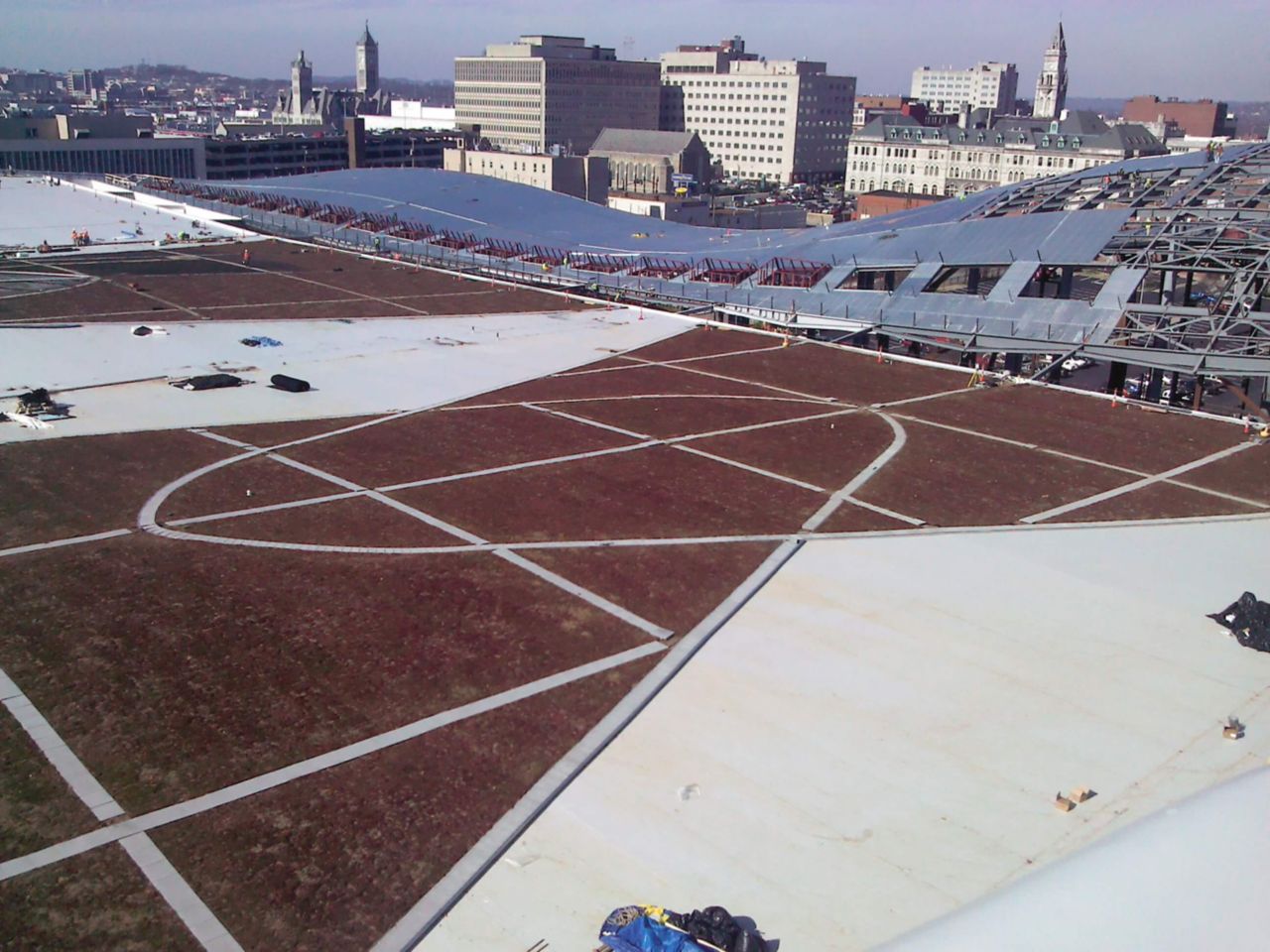 Despite facing numerous obstacles, Baker Roofing was able to complete the project on-time and within budget. “Baker Roofing did a fine job,” remarked VanPelt. “They were easy to work with and very professional. We enjoyed working with them.”It was this professionalism that earned Baker Roofing first place in the Sustainability Category of Sika Sarnafil’s 2013 Contractor Project of the Year competition.

Today, people are singing the roof’s praises for both its aesthetics and sustainability. “Everyone is fascinated by the roof — it is different every season and looks great,” Clippard said. “The roof has done incredibly well on the utility matrix. During our first year of operation, we consumed 20 percent less energy and almost 40 percent less water than conventionally designed building of the same type. We are hoping to set an example for how buildings can save energy with features like vegetative roofs.”

“The roof is a signature element of this project and looks great and is performing very well,” remarked Svedberg.