When the Chicago Botanic Garden opened its new Daniel F. and Ada L. Rice Plant Conservation Science Center in September, 2009, its stated goal was to “Save the Plants, Save the Planet.” The Center has attracted some attention in pursuit of this goal – R&D Magazine named it 2010 Laboratory of the Year, and it was recently awarded a LEED Gold rating (Leadership in Energy and Environmental Design) by the U.S. Green Building Council.

This 38,000 square-foot building serves as a state-of-the-art research facility and laboratory dedicated to plant conservation and public education. It was designed to be used by the Garden’s staff of full-time scientists and research assistants, interns, graduate students, research associates and collaborators, who will conduct research on conservation and environmental issues such as climate change, habitat loss and fragmentation, invasive species, and pollution. The facility will also serve as a teaching facility for Northwestern University’s doctoral program in plant biology and conservation.

One of the low-slung building’s main “classrooms” is it’s garden roof, which Sika Sarnafil extensively and know it is a good company that produces high-quality products. In fact, we specify Sika Sarnafil systems on all our single-ply roofs.

“Mark Moran, vice president of Knickerbocker Roofing and Paving Co., Inc. of Harvey, Illinois added, “Not only do we have a lot of faith in the Sika Sarnafil systems, but having one manufacturer provide both the waterproofing and roofing membrane meant we could install one continuous system on the roof.” 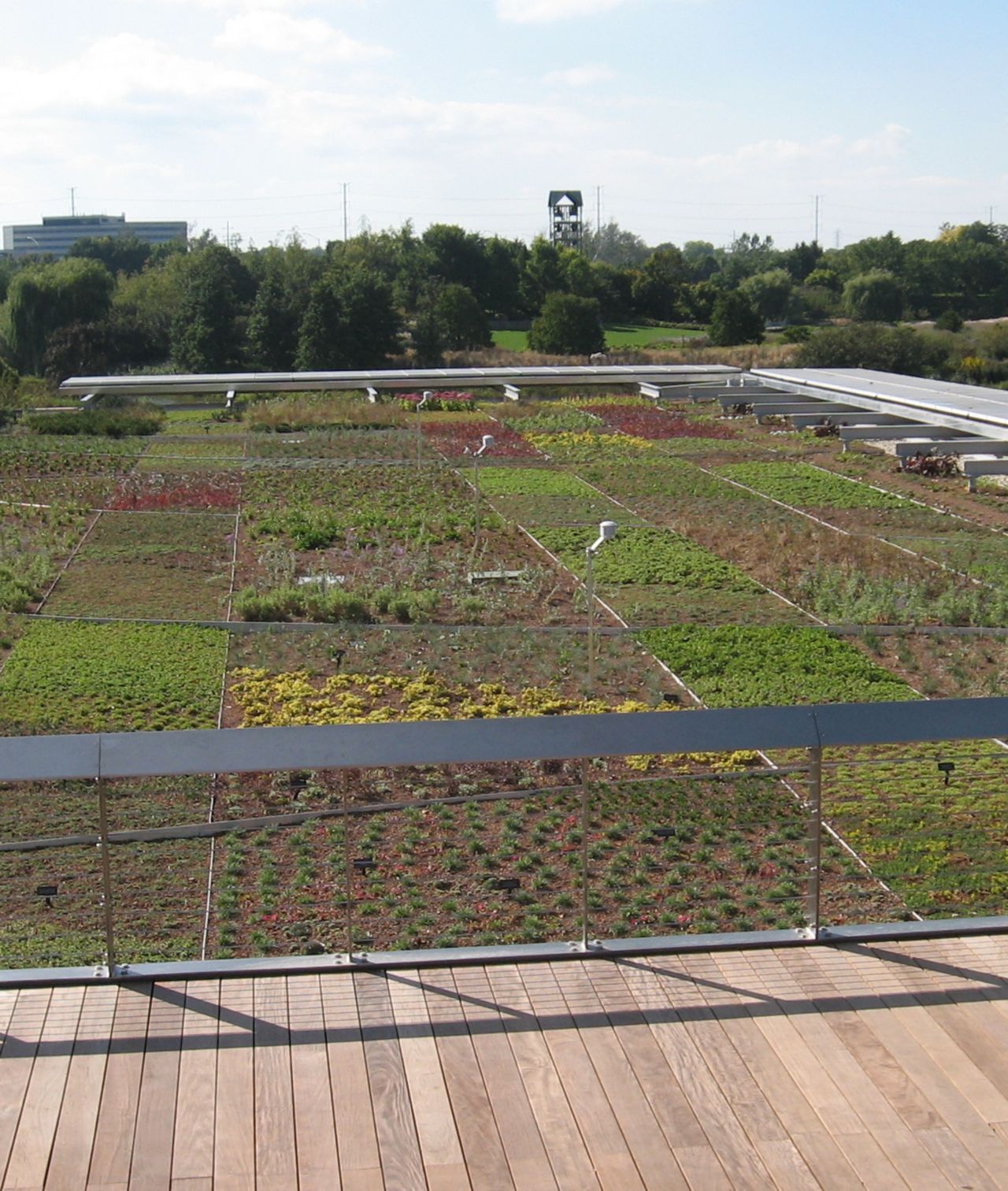 A MANY LAYERED INSTALLATION

Knickerbocker Roofing’s work began with the installation of the white roofing membrane over the atrium, then installation of the waterproofing on the green roofs. “There were some tricky conditions where the roofing membrane was flashed under the curtainwall, as well as at the stone coping on the perimeter,” Stetson said. “Knickerbocker Roofing handled it very well and did a good job” he added.

“We also had a challenge tying in the flashing of the green roof with the waterproofing membrane between the concrete slabs of the mechanical wells,” Moran stated. “Another issue was when the overlook decks were installed – there was not enough height for the way they were installing the decks,” Moran explained. “We had to have special flashings for all the posts supporting the decks. Fortunately, Sika Sarnafil representatives were there to help us.

“Moran added that Sika Sarnafil also helped with preparing bids and is a “great partner to work with. They have always been very helpful.

“We were working under time pressure because a big opening ceremony had been scheduled,” Moran explained. “That meant everything had to be finished right on deadline.

“The waterproofing system for the green roof also included an Electric Field Vector Mapping® (EFVM®) System. EFVM uses pulses of low voltage electricity to detect roof system breaches, even with the vegetative cover in place. The breach can then be easily identified and repaired.

“The composition of the green roof was very interesting,” Stetson said. The first three layers consisted of a 5/8” gypsum board, the EFVM grounding screen and a felt separation. The Sarnafil waterproofing membrane was loose laid on top of that, followed by the EFVM conductors (consisting of a wire around the perimeter of the roof) and another felt separation. Extruded polystyrene insulation, a water retention mat and a water retention/drainage panel consisting of cups filled with minerals and soil came next. A filter fabric went on top of that, followed by the plants and growing media. This media ranged from four to eight inches thick, depending on the plants. A slotted aluminum angle separated the growing media from areas of free draining gravel.

Today the roof on the Daniel F. and Ada L. Rice Plant Conservation Science Center functions as a tool used to teach visitors about the environmental benefits of a green roof, and also serves as a model of an energy-efficient roof. “The Chicago Botanic Garden is an outstanding client to have because of their commitment to quality, sustainable, green buildings,” Stetson said. “In addition to the green roof and white roofing membrane, the building also features 288 photovoltaic panels, which supply about six percent of the building’s energy needs.

“Moran credits Sika Sarnafil for its part during the roof design. “By offering a variety of roofing and waterproofing systems, Sika Sarnafil was able to meet the Chicago Botanic Gardens’ needs for a white, energy efficient roof as well as a proven waterproofing system,” he stated. “We were able to give them a cost-competitive roof that provided a consistency in all areas of the roof that they wouldn’t have had otherwise.”