Installing a roof at an active airport is always difficult due to requirements regarding debris containment and passenger safety. Add a location in the midst of an intense rainy season, where it takes three weeks to receive roofing materials, and you have the challenges Advanced Roofing, Inc. (ARI) faced when reroofing the Cyril E. KingAirport in St. Thomas.

“Most contractors wouldn’t want this job, but this was a perfect project for us,” remarked David Baytosh, project manager at ARI. “We are used to dealing with challenges by being creative and getting everyone involved.

”The fact that the new roof was going to be a Sarnafil system also helped. “Our past experience with Sika Roofing has been phenomenal,” Baytosh said. “They are amazing, proactive, and we have a great relationship with them. I wish all our suppliers were as good. 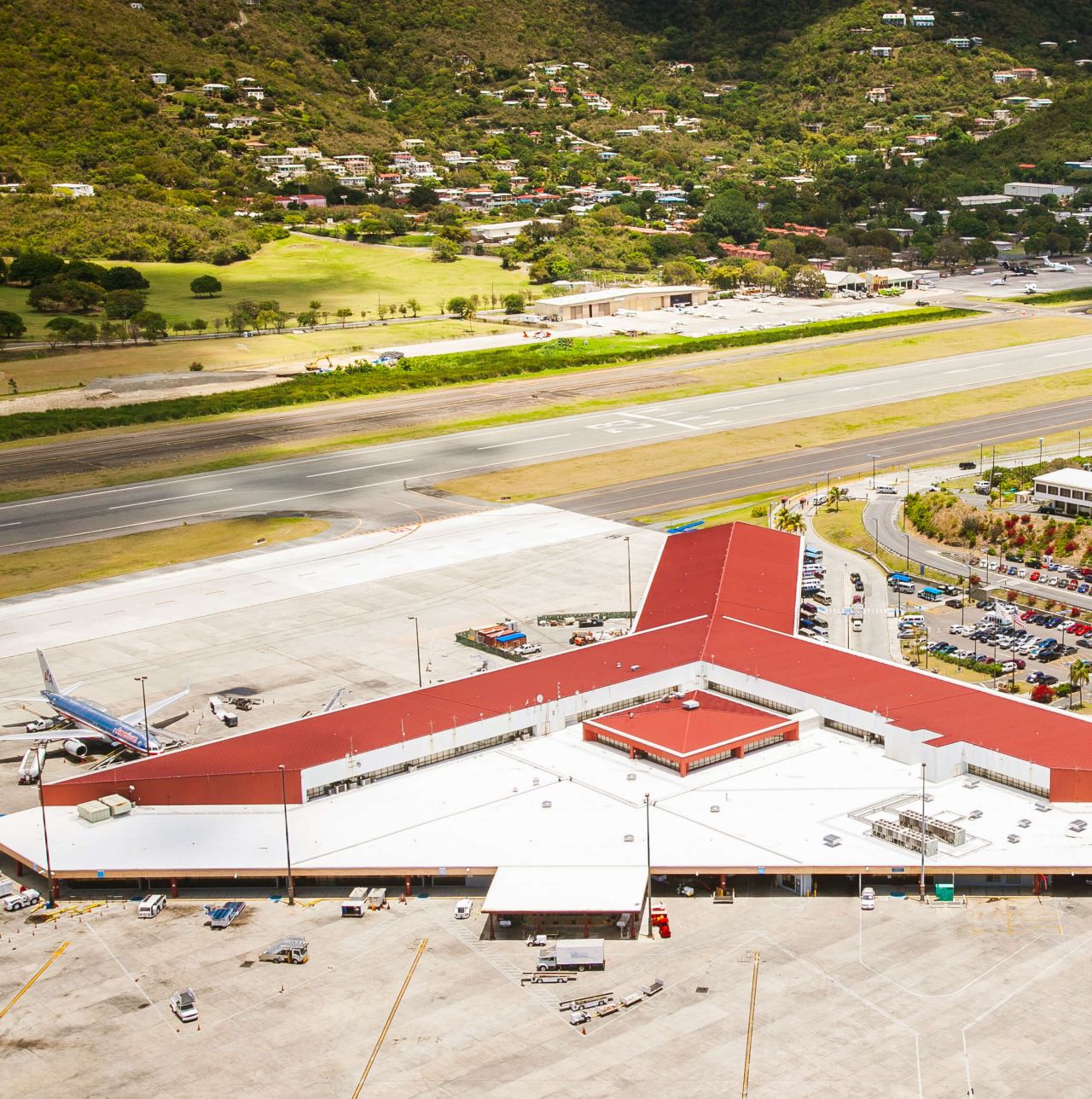 A “GLUED AND SCREWED” INSTALLATION

The project began with removal of the original 20-plus year old, 119,100 square-foot single-ply roof and tapered insulation system down to the metal deck. Many areas of decking required rust inhibitor treatment or an overlay of new metal decking prior to spraying a cold process lap cement to the deck and installing a felt underlayment. New tapered insulation and gypsum board were then screwed down, and the Sarnafil EnergySmart Roof membrane was fully adhered, combined with mechanically attached Sarnafil Polymer Battens in the seam.

“We ‘glued and screwed the Sarnafil membrane at the seams in order to meet the Factory Mutual requirements,” Baytosh stated. “We also used extra heavy duty screws and the Sarnafil Edge Grippre-fabricated metal.” In addition to the re-roof, ARI also repaired the integrated gutter at the standing seam metal roof, which involved cutting back the metal panels and replacing the insulation. New Sarnafil S327 was installed and turned under the standing seam with a slip flashing. Sika Roofing representatives were supportive throughout the installation. “The representatives were on site several times, which worked out really well,” said Steven Henriquez, vice president-aviation at URS Caribe, LLP of Tampa, Florida, the engineering consultant. “They also recommended alternative ways to improve the roofing system."

As with most airport projects, security was paramount. The ARI crew had to pass U.S. customs background checks and visit the local police department for screening and testing before obtaining a Security Identification Display Area (SIDA) badge. Some ARI employees had to attend an additional class, with testing, to obtain a ramp access badge, and other employees also had to qualify to obtain escort status to accompany the inspectors and other people visiting the site.

Most of the work was done directly next to a runway, which meant that debris from the roof tear-off had to be contained so as not to interfere with the airplanes. Passenger safety was another concern.“Because the Cyril E. King Airport has limited tarmacs, passengers were required to walk on the apron below the work area,” Baytosh explained. “We had to stop working whenever passengers were boarding or deplaning.”

It took approximately three weeks to ship roofing materials to St. Thomas from the continental United States and on site staging space was limited, so ARI had to work closely with Sika Roofing to plan the delivery of materials. “ARI did a great job in making sure all materials were on hand when needed,” said Byron Todman, senior engineer at the Virgin Islands Port Authority.“ Sika has always been responsive to our needs, which was a big help, ”Baytosh added.

Despite all the planning, there was one thing ARI couldn’t control: Mother Nature. The work began in September, the start of one of the wettest seasons on record, including one month which received three times the normal amount of rainfall. “In order to keep everything watertight, ARI had to be sure to only tear off what they could replace that day,” said Henriquez. “ARI watched the weather radar constantly, but unfortunately the radar doesn’t always pick up showers.” One way ARI dealt with the weather delays was by doing some working the warehouse. “New insulation and gypsum board for the gutters were cut to size and adhered together during rain storms, so once the weather cleared we could jump right back on the installation,” Baytosh remarked. ARI also took advantage of its in-house sheet metal shop, HVAC division and lightning protection divisions to facilitate the project. The ARI crew worked seven days a week during the last two months of the project to make up for the rain delays and complete the project on time. “Advanced Roofing was the right choice for this job,” Henriquez said. “They knew what they were doing and I’ve never found people who were easier to work with.” It was this professionalism that earned Advanced Roofing, Inc., second place in the Low Slope Category of Sika Sarnafil’s 2014 Project of the Year competition.

Since the installation was completed in March of 2014, the roof of the Cyril E. King Airport has performed well through another rainy season and tropical storms. “Sarnafil is a great system that’s proven to work,” Baytosh commented. “We would definitely use it again – rain or shine.”