Man at Work Sculpture Garden at the Grohmann Museum

It’s not unusual for roofers to have supervisors looking over their shoulders when doing installations. However, when the crew from F.J.A. Christiansen Roofing Co., Inc. of Milwaukee installed a waterproofing system on the roof of the Grohmann Museum, they would sometimes have a glass blower, farmer, or foundry worker watching over them. Fortunately these characters didn’t criticize or offer advice, since they were made entirely of bronze.

These bronze sculptures are part of a rooftop garden on top of the Milwaukee School of Engineering’s Grohmann Museum. This museum, which opened in a renovated building in 2007, features the world’s most comprehensive collection of industrial art. The roof garden includes 18 bronze reproductions — six life-sized sculptures in the garden and 12 nine-feet-tall figures along the roof perimeter. These sculptures are replicas of smaller figures in the Grohmann’s “Man at Work” Collection. According to James Kieselburg, II, assistant director at the Grohmann Museum, the figures “celebrate human industry” and include workers in agriculture, retail, intellectual trades like doctors and lawyers — even tax collectors. “It is a collection unlike any other,” he pointed out.

The roof garden, which also features pavers, sod, and various planters in addition to the sculptures, is open to museum patrons and staff and is also used for special functions. “The roof has been in high demand since it opened,” Kieselburg stated. 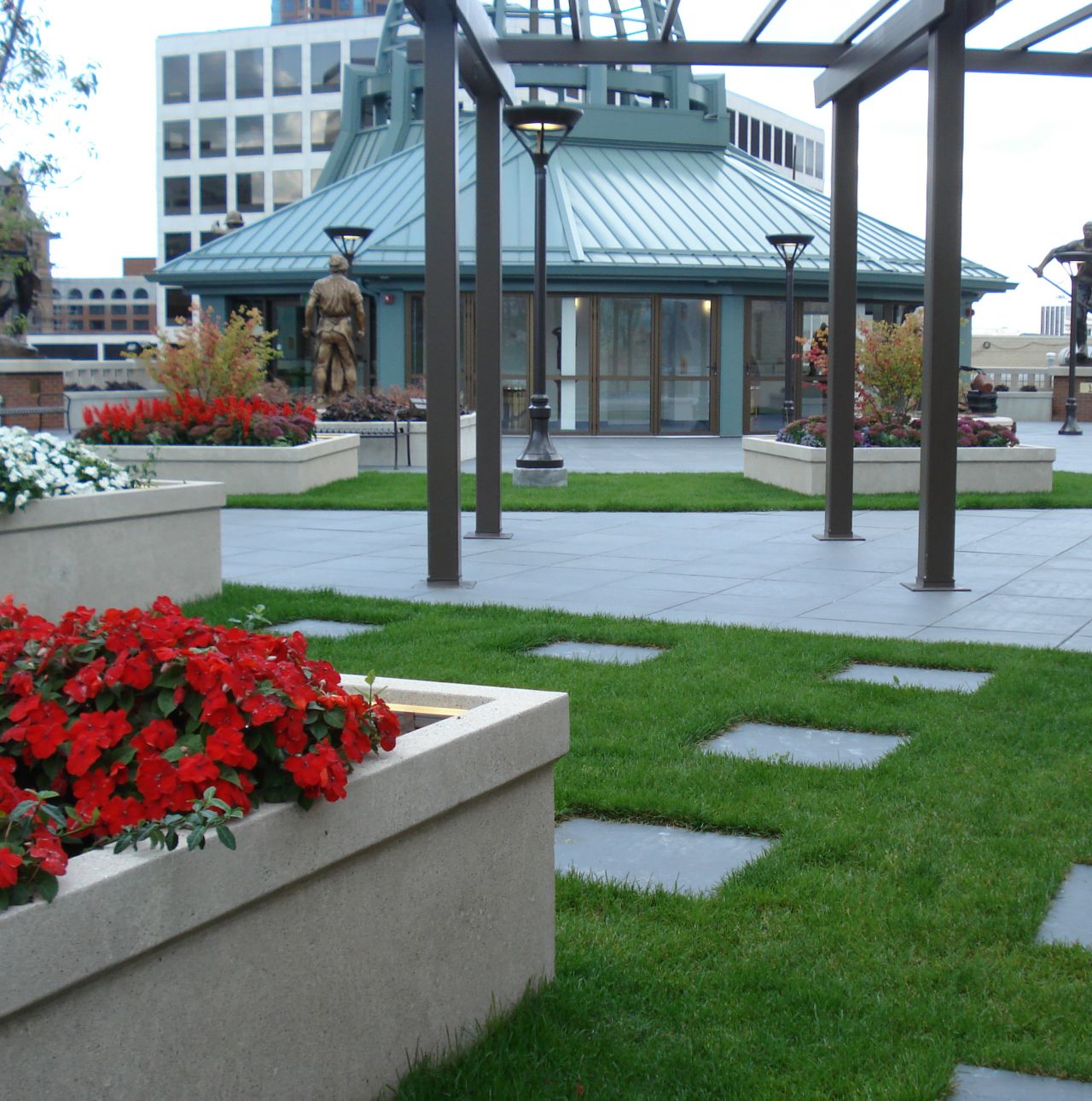 “We specified the Sika Sarnafil system because the waterproofing system was under a permanent roof garden so we wanted something durable,” said Scott Ramlow, a partner at Uihlein-Wilson Architects of Milwaukee. “Sika Sarnafil has a suite of products that fit this application better than anyone else. And with the vector system, finding leaks during an installation is particularly easy.”

The Electric Field Vector Mapping® system (EFVM) consists of a grounding foil that is installed underneath the waterproofing membrane and is grounded to the structure. The system uses special equipment that allows a technician to trace the flow of low voltage current that is sent out across the membrane as it travels to the ground through a breach in the membrane. Even the smallest of leaks can be located with pinpoint accuracy by following the direction of the electric current.

Installation of the waterproofing system was fraught with challenges, according to Brian Osgood, sales and estimator/project manager at F.J. A. Christiansen Roofing Co., Inc. “We had to work under a very tight time frame because a grand opening party had already been scheduled for the building,” Osgood explained. “That gave us about two months to install the roof.”

Fortunately, the previous built-up roof had already been torn off, so Christiansen Roofing could start with the installation of a two-ply vapor barrier. Tapered extruded polystyrene was installed over that, and then the EFVM’s foil-faced sheet was applied. Finally the Sarnafil G476 membrane was loose-laid on top, followed by the vegetative cover and /or the pavers, which were installed on a pedestal system.

“The paver system was laid out on a radius pattern, which is very difficult to install,” Osgood explained. “We were also going on a tapered system, so the substrate was not flat.”

The statues also posed a challenge. First, a concrete pad was poured over the vapor barrier. This pad was then flashed with Sarnafil G459 flashing membrane and a Sarnafil G445 protection layer was installed over it. “This was fairly challenging and there were pins to hold the concrete in place that had to be sealed before the concrete was poured,” Osgood said.

The concrete statue bases were then poured into place, and the roof insulation and EFVM sheet were installed around the pad. Finally, the Sarnafil G410 membrane was tied into the Sarnafil G459 flashing membrane.

Osgood said another challenge was dealing with all the different trades that were on the roof. “There were electricians, masons, landscapers, irrigation people — almost every trade — up on that roof,” he stated. “We had to coordinate with all of them to protect our work. We had different areas designated for traffic and for work.”

The coordination seemed to work. “We did an EFVM test before the green roof was installed and there were no leaks then or since,” Osgood said. “That’s amazing, considering the amount of construction traffic that was on the roof.”

Osgood also credits the Sika Sarnafil representatives for their help with the installation. “As it turned out, a lot of the project was designed as we went along, so we were constantly in touch with Sika Sarnafil about details and changes,” he explained. “They were very helpful.”

“This was a complicated roof because of all the different flashing conditions and was challenging for both Sika Sarnafil and Christiansen,” Ramlow pointed out. “They both did a good job and I would use them again.”

In fact, Christiansen’s ability to overcome these challenges earned it Second Place in Sika Sarnafil’s 2007 Project of the Year Waterproofing category.

Not surprisingly, the unusual roof garden and its sculptures are enjoying a lot of attention. “The roof is generating great interest for the museum and for the Milwaukee School of Engineering,” Ramlow said.“

The roof is outstanding and people have been captivated by it,” Kieselburg said. “As a result, we’ve been hosting events all summer. The roof has been performing very well.”

“This is one of the most interesting roofs in the city,” Osgood stated. And although visitors to the roof garden probably won’t notice the waterproofing system on the roof, they can take comfort in knowing that the system, like the men depicted by the sculptures on top of it, is a very hard worker.

INTERESTED IN WATERPROOFING FOR YOUR NEXT PROJECT? GET MORE INFORMATION: