Until recently, the most noteworthy aspect of the roof on Rockwell Automation’s global headquarters in downtown Milwaukee was its Allen-Bradley Clock tower – one of the largest four-faced clock towers in the world. Now the roof has another claim to fame – it boasts what is believed to be the largest single-level green roof (48,500square feet) in the state of Wisconsin.

“We had previously evaluated green roof technology and we knew there were many benefits to a vegetated roof,” David Antonson, Plant Engineering Analyst at Rockwell Automation explained. “These benefits include longevity – most green roofs last around 30 years – and increased insulating effect. In addition, green roofs reduce stormwater run-off, and since we average 1.3 million gallons of stormwater year we were looking for ways to reduce that by more than half. “

So in 2010, when Brian Schaut, Vice-president at Milwaukee-based F.J.A. Christiansen Roofing Company, a Tecta America Company, shared with Rockwell Automation the news that the Milwaukee Metropolitan Sewerage District (MMSD) had some grants for green roofs, the company was interested. “With the proposed grant, we were able to build the business case and received senior leadership support for the project,” Antonson said. “We applied and were one of the 14 chosen to receive funding out of the 26 submissions.” 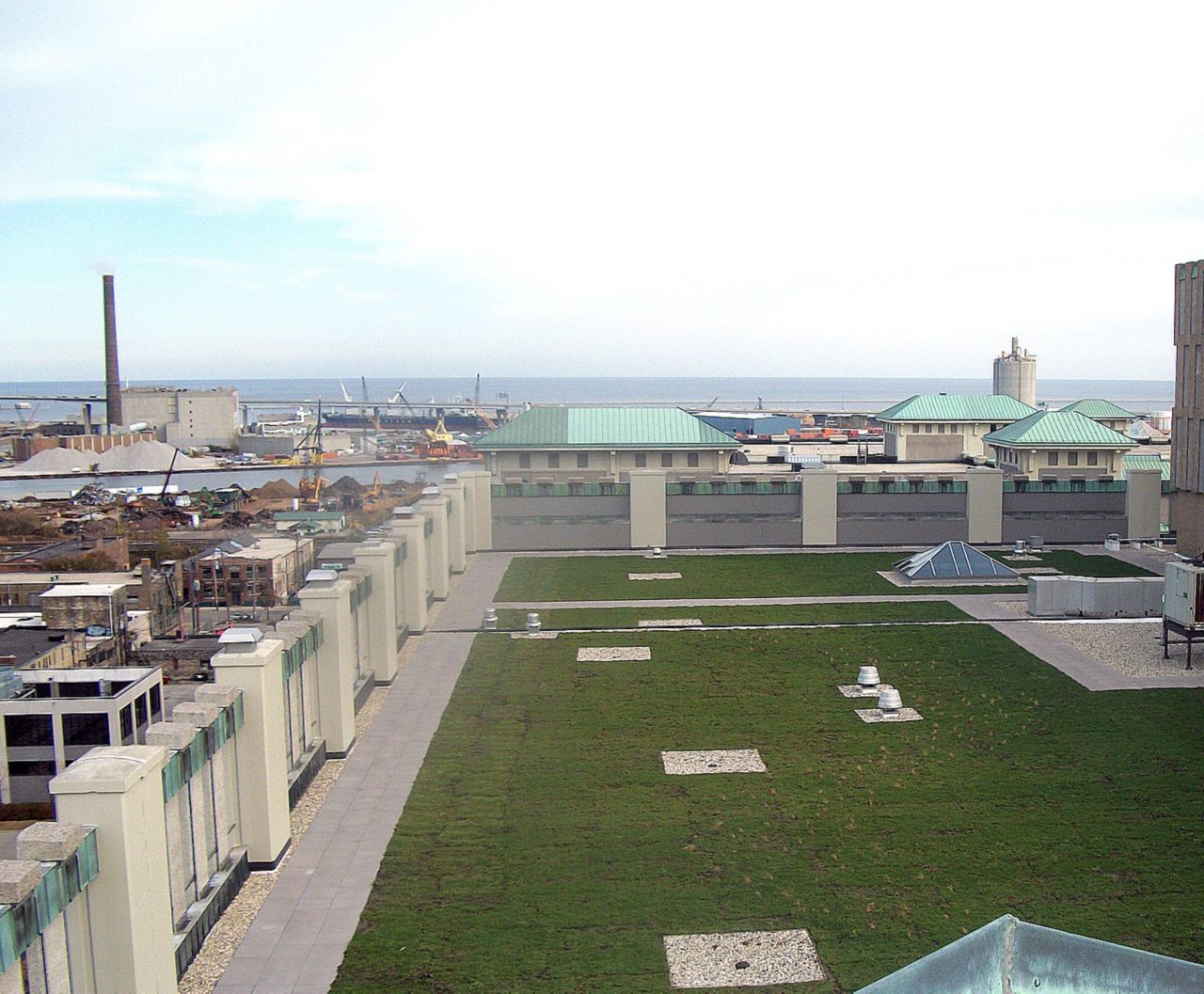 The MMSD’s Regional Green Roof Initiative was a $5 million program with “the goal of demonstrating that green roofs are a feasible technology with many benefits,” stated Chris Schultz, Water Quality Senior Project Manager at MMSD. “We selected the Rockwell Automation roof because of several factors. First, the building is a notable landmark in Milwaukee – everyone knows where the clock tower is – so it provides us with high visibility. It’s also located in a combined sewer area, which means both stormwater and sanitary waste water all going into the same pipe. By keeping excess water from roofs, parking lots, and impervious surfaces out of the sewer system, we’re reducing the risk of basement backups and sewer overflows. Green roofs also help prevent rain from becoming polluted stormwater runoff, the biggest remaining threat to our rivers and lakes in the United States.”

SHOWING THE BENEFITS OF GREEN ROOFS

Because this roof was going to be so visible and would serve as an example of the benefits of green roofing, it was important to choose a high-performance roofing system that was both durable and experienced in the green roof arena. “We selected the Sika Sarnafil system because they make god membrane and we have used it a lot in the past and so were comfortable with it,” remarked Schaut.

In addition, Sika Sarnafil’s partnership with Tecta America allowed them to offer Rockwell a long-term warranty on this vegetated roof. Sika Sarnafil will provide a 20-year systems warranty while F.J.A. Christiansen Roofing will provide a 20-year TectaGreen warranty. The combined warranties cover the plant material and waterproofing membranes and accessories, thereby eliminating many of the headaches customers face when installing complex roofing systems.

After F.J.A. Christiansen conducted an infrared scan over the existing roof to check for leaks, the new roofing system was installed over the existing roof structure (BUR). The new system included 3/8” thick polyisocyanurate insulation; an Electric Field Vector Mapping® System, which uses pulses of low voltage electricity to detect roof system breaches should leaks develop in the future; the Sika Sarnafil waterproofing membrane; a drainage and retention mat; an additional water retention mat; 3” of engineered soil; and the vegetative mat.“ Another advantage of the Sika Sarnafil system is that you don’t need a root barrier,” Schaut said.

The green roof also features two data monitoring systems – one of which uses Rockwell Automation components – which will record the rainfall, wind speed, roof temperature, and moisture content of the roof, Antonson said. “We want to be able to calculate how much the roof is savings us indifferent areas, including stormwater runoff,” he explained. “In the first six month the roof had captured about 30,000 gallons.”

In addition to the vegetative area, the roof also includes an observation deck, a patio done in Rockwell’s trademark octagonal shape, and a perimeter paver system – all of which were installed by F.J.A. Christiansen Roofing.

”One of the biggest challenges we faced during the installation was the tight timeline,” Schaut said. “The roof had to be completed by the October ribbon cutting date, which meant that near the end of the project we were working alongside other trades like masonry worker and painters. This required a lot of coordination and we also had to limit our staging area so as not to interfere with their activities.”

There was also a drought that summer and that caused a delay in the shipment of the vegetative mat, and “we were very concerned about that,” Schaut remarked.

Angie Durhman, National Green Roof Manager at Tecta America, said one notable feature of the project was the company’s ability to incorporate perennials and native plants into the standard vegetative mat materials. “We created these little berms that allowed us to include the additional plants, which was pretty cool,” she stated. The Rockwell roof now features 12 varieties of sedum and 12varieties of native perennials.

Fortunately, everything was done on time for the ribbon cutting, thanks in part to solid teamwork. “We worked closely with Sika Sarnafil representatives during the installation,” said Schaut, “and that was helpful.

Added Antonson, “F.J.A. Christiansen Roofing always does an excellent job, and this was no exception. They finished the roof on time and within budget.”

It was this professionalism that earned F.J.A. Christiansen Roofing Second Place in Sika Sarnafil’s 2010 Contractor Project of the Year competition, Sustainability Category.

A ROOF TO WATCH

So far everyone involved has been pleased with the new green roof. “I really liked this project and am glad to see it being promoted the way it has,” Schultz said. “This year we’ve had a lot more interest from other corporations asking about funding for green roofs. The Rockwell monitoring system has also provided us with some real numbers regarding the roof’s effectiveness.”

Schaut said he’s very happy with the roof and looking forward to seeing it bloom this spring and summer. He added, “Rockwell Automations concerned about the environment, and wanted to put out a signature statement demonstrating that they can make a difference. By managing 1.3 million gallons of stormwater annually with this roof and thus preventing pollutants from entering Lake Michigan, they are doing just that.”