It has been said that the future is found in our schools. At the Jonathan E. Reed School in Waterbury, Connecticut, the future was very much on the school planners’ minds as they looked for a roofing system for the new elementary school.

The school is designed for a population of 550 students, ranging in grades from kindergarten to eighth grade. Named for a beloved pastor and the first school in Waterbury to be named after an African American, the Jonathan E. Reed School features a “child-friendly environment with bright, airy, safe and functional spaces,” according to Bruce Wujcik, senior architect at Svigals + Partners in New Haven, Connecticut.

Protecting the earth that these students will inherit someday was one of the reasons the City of Waterbury went with the Sika Sarnafil EcoBond Roof system.

The EcoBond Roof features a vinyl Sarnafil G410 membrane attached to the roofing substrate with Sarnacol 2121, a water-based low VOC adhesive, to be both ecological and economical in helping to meet the building owner’s need for a cost-effective, sustainable roofing solution.

The Sarnafil G410 membrane was developed specifically for adhered applications and has the best dimensional stability of any single-ply membrane in the roofing industry, based on testing to ASTM D1204.

Further, the membrane consists of 10 percent recycled content (pre- and post-consumer materials), as verified by UL Environment. Sarnacol 2121 adhesive is more cost-effective than solvent-based adhesives due to lower material usage and faster application.

Sarnacol 2121 may be squeegee-, roller- or spray-applied, providing the maximum in application versatility. With Sarnacol 2121, adhesive is applied only to the roofing substrate and membrane is immediately laid into the adhesive. 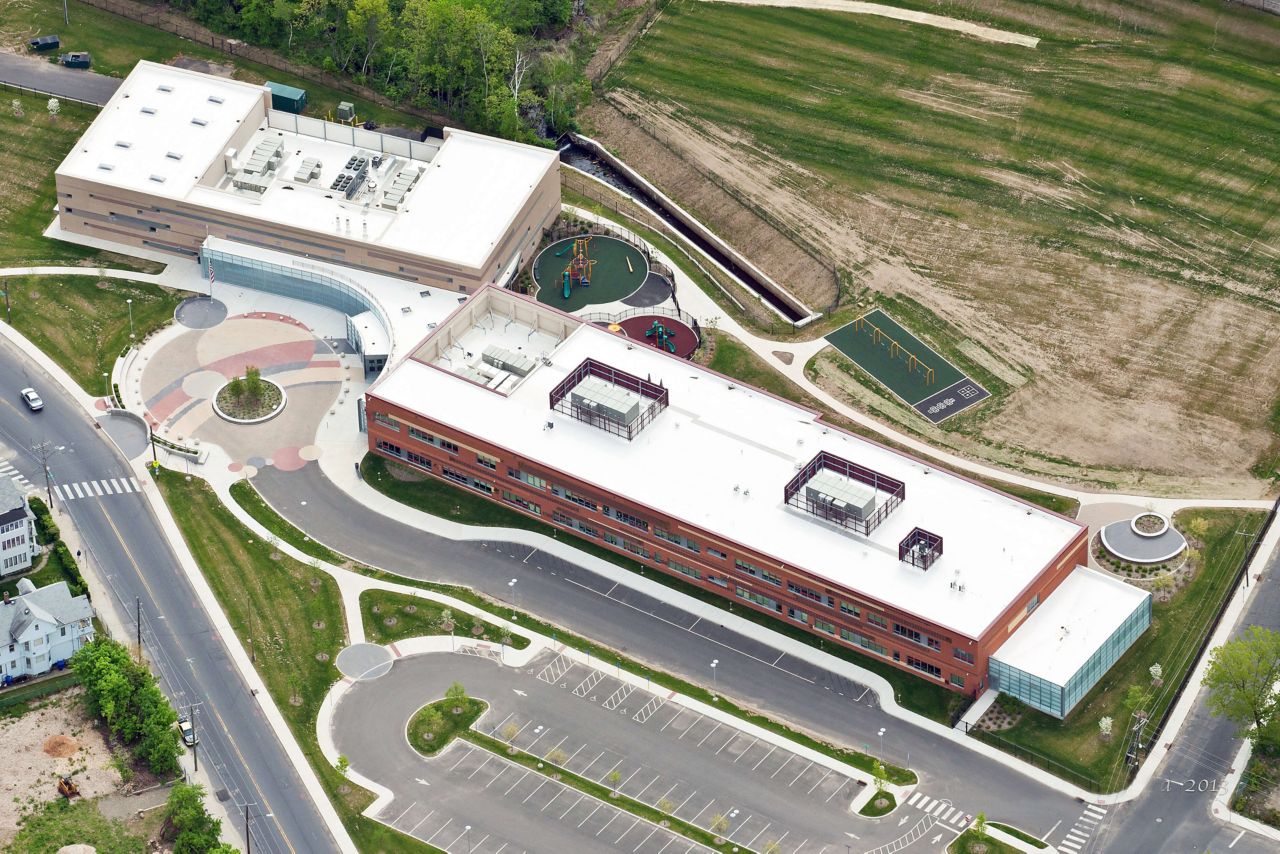 A SMOOTH AND SPEEDY INSTALLATION

“We have used Sarnafil roof systems on other buildings — including another school — and it has worked well for us,” said Wujcik. “Sika Sarnafil is our standard system because we like the products and how the seams are heat-welded. It is a good company with good service and a good reputation. I also like how they provide everything you need like metal coping, flashing and fasteners. They make my job easier.”

“Sika Sarnafil is one of the top products in the PVC market and it is difficult not to use them with the accessories and support they provide,” said Michael Dupont, project coordinator at Titan Roofing, Inc. of Chicopee, Massachusetts. “They are always trying to make our job more successful and it is comforting to be associated with a company that has been an industry leader for decades. Sika roofing has also been the pioneer in recycling membrane, and using roofing membrane with recycled content is certainly a good thing for the environment,” he added.

Almost five percent of all materials that go into landfills are from the roofing industry, according to a 2004 white paper released by the National Roofing Contractors Association.

TITAN ROOFING HAS BEEN INSTALLING SIKA ROOFING SYSTEMS SINCE 1984

The Reed School installation, according to Pazmino, was very simple. “Everything pretty much went off without a hitch.”

Dupont agreed. “This was as easy as any other Sika Sarnafil installation,” he remarked. He explained that there were four different roof assemblies on this project. The main roof had a steel deck with 5/8” Securock 4’ x 8’ boards loose laid over the steel deck. A Sarnavap vapor retarder was installed over that, followed by the extruded polystyrene insulation. A second Securock roof board was then mechanically-attached, and the Sarnafil membrane fully adhered to it using the water-based Sarnacol 2121 adhesive.

Other roof areas differed in that they used tapered insulation, while a third roof had a concrete deck, and so used the Sarnavap Self Adhered vapor barrier over a primed deck with no underlayment board. The subsequent layers of insulation and coverboard were then both attached using the Olybond insulation adhesive. “We used the self-adhered vapor retarder on this deck to keep the insulation in place, since the insulation was not mechanically fastened to the concrete deck,” Dupont explained.

“For all the various roofing assemblies, we had to prefabricate all the metal,” Dupont added.

Although the installation went well, Titan Roofing knew that if there were problems Sika roofing representatives would be available to help. “The technical representatives are very good,” Pazmino stated. “Whenever we need them on site they are more than accommodating.”

“The Sika Sarnafil folks are always trying to help us make our project more successful,” said Dupont. “Once we get things approved, everything goes smoothly.”

Testing by Sika Sarnafil has made clear that simply switching from a notched squeegee application for the Sarnacol 2121 adhesive to a roller or spray equipment application will extend coverage rates significantly. This saves many thousands of dollars in material costs and makes the EcoBond Roof a premium roofing system available at a commodity price.

Today the Reed School roof is performing well and the building is watertight, said Wujcik. “Titan Roofing did a great job,” he remarked. “They worked with us to offer solutions, and kept an eye on the budget. They even completed the roof ahead of schedule.”

“As with all Sika Sarnafil projects, it’s nice to know that once the project is completed we won’t have issues or leaks,” Dupont said. “This Reed School roof is not only great for the environment, but is also economical for the owner because its white surface will reflect the sun’s rays, keeping the building cooler and helping to reduce energy expenses related to air conditioning. It’s a smart thing to do.

INTERESTED IN DOING AN ECOBOND ROOF? GET MORE INFORMATION: