Twelve-stories above Chicago’s busy financial district sits an island of greenery snuggled amid a sea of boiling-hot tar roofs. Most striking is the comparison between this island and its adjacent neighbor, the Cook County Building, with its black asphalt top. When summer temperatures in the Windy City reach 90 degrees, City Hall’s green roof reflects the temperature outside, while its neighbor’s roof can reach nearly 160 degrees.

“You can feel a difference between the two buildings in the summer,” said Kevin Laberge, environmental engineer with the City of Chicago’s Department of Environment (DOE). “It’s such a stark contrast. One roof is big, empty and unused, while the other is providing habitat for wildlife, reducing temperatures and retaining storm water.”

After experiencing a number of heat-related deaths in 1995 and 1996, Chicago was chosen to participate in the U.S. Environmental Protection Agency’s Urban Heat Island Initiative, a program aimed at reducing urban air temperatures across the country. The idea is simple: A city is made up of thousands of buildings packed into a small space. Each building’s roof absorbs heat from the sun, increasing the demands on air-conditioning units and driving up energy costs, which in turn creates more pollution and leaves the city feeling hot. On an average summer day, a city like Chicago can actually be 10 degrees warmer than its suburban neighbors.

City Hall was chosen as the first municipal building in the city to be crowned green because of the unique structural capabilities of its roof. “The building, which opened in 1911, was originally intended to have additional floors that were never built,” said Tom Vukovich, city architect with the Department of General Services. Because the structure has a floor-load capacity and not a roof-load capacity, Vukovich said, it is able to support heavier vegetation and even trees. 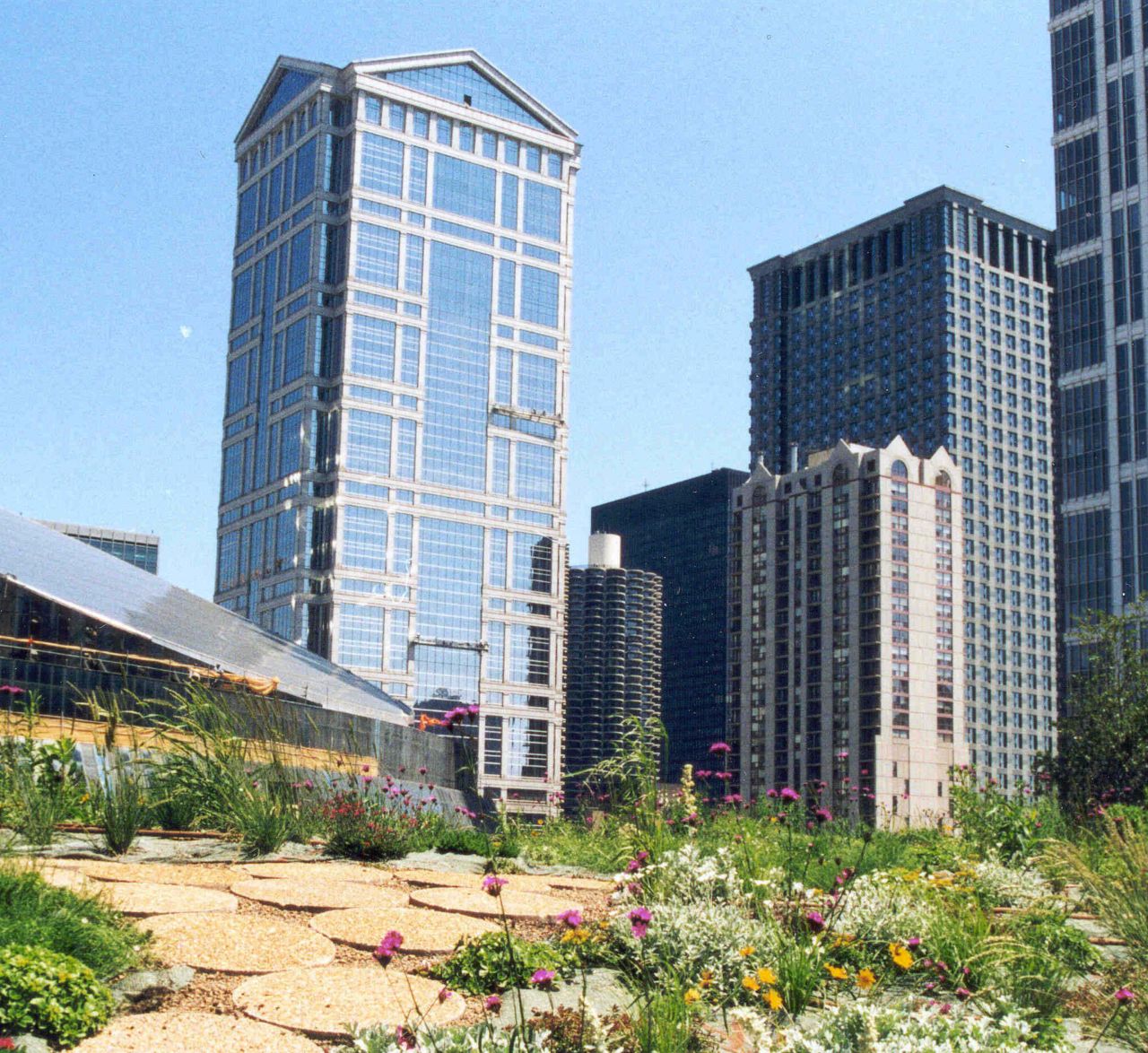 City Hall is already reaping the environmental and economic benefits of its green roof. Most notably, it saves the City of Chicago almost $10,000 annually in energy costs.

During summer and winter months, the roof exhibits superior insulation properties, requiring as much as 30% less from City Hall’s heating and air-conditioning systems over the last four years.

Additionally, the green roof reduces storm water runoff by absorbing as much as 75% of the rainwater that falls on it, lightening the load of Chicago’s sewer system. Improved air quality and a reduction in noise pollution by as much as 40 decibels as compared to a traditional flat roof are also typical to green roofs like City Hall’s.

Finally, vegetated roofs extend their own life by moderating temperature swings that can lead to additional wear and tear typical to a climate like Chicago’s. Where the average building’s roof may last 20 years, green roofs can endure up to 50.

“City Hall’s green roof gave us [the city] a focus on sustainability in Chicago,” said Laberge. “There are so many benefits associated with green roofing; storm water retention, energy savings and the creation of green space in an area that is often overlooked as being useful. All of these benefits are applicable to making Chicago a healthier and nicer place to live.”

The $1.5 million, 38,800 square foot Chicago City Hall Green Roof project began in 1998 with a year of planning, designing, contracting and bidding. Construction started in April 2000 and was completed a year later.

City Hall’s exiting BUR system was in place with a gravel surface, but in order to complete the green roof, contractor Bennett & Brosseau needed an odor-free waterproofing system that would work with the future landscaping.

“We needed a manufacturer that had some experience with green roofs before,” said Jim Brosseau, owner of Bennett & Brosseau, Romeoville, Ill. “We needed a system that wasn’t dependant on adhesives and asphalts. Sika Sarnafil understood that.

Bennett & Brosseau’s team put it to the test. Leaving two inches of water on the membrane for 48 hours assured them that there were no leaks.

On top, the team laid another protection layer followed by additional insulation. Then a filter fabric, growth medium, some concrete pavers and an erosion blanket to keep the soil in one place. Finally, over 20,000 plants of more than 100 species were planted on top. 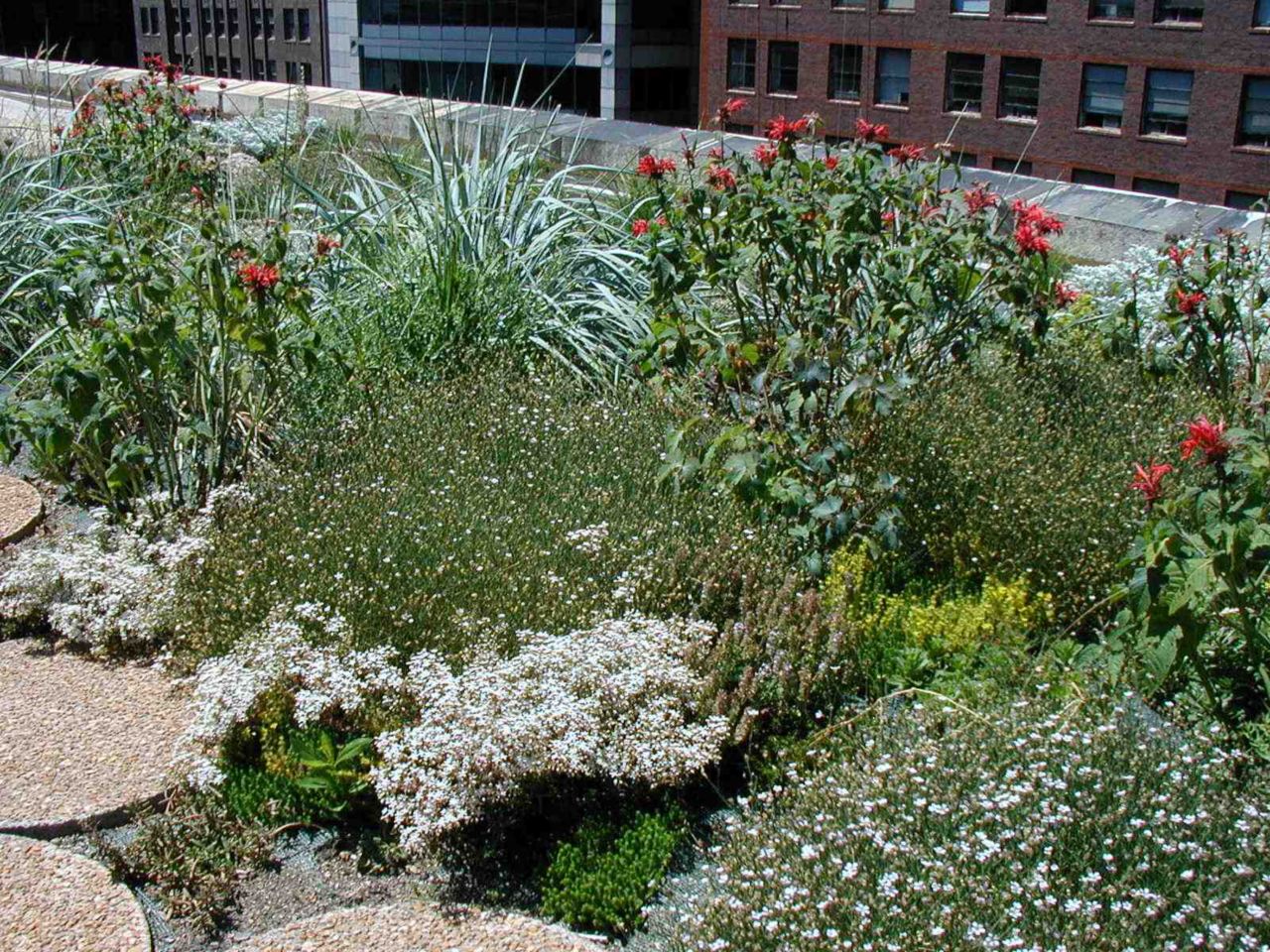 THE CITY OF CHICAGO SECONDS THE NOTION

“We felt most comfortable with the Sarnafil® membrane and its ability to work well with the green roof,” said Vukovich. “The membrane had the flexibility that we were looking for, especially going over the roof deck and clay tile arches. Sika Sarnafil understood the construction methodology of the then 90-year-old building.

”Because City Hall’s green roof has proven so successful, the City of Chicago has established its own Green Roof Initiative, which has planted more than 80 vegetated roofs in the City, including most notably those on the Peggy Notebart Nature Museum and the Chicago Center for Green Technology.

Both, we might add, are clad with Sika Sarnafil waterproofing systems.