As part of a university-wide initiative to bring solar power to all four of its campuses, Arizona State University recently installed a solar thermal system on the Sun Devil Fitness Complex in Tempe to provide heating, air conditioning, and hot water to the complex and also heat the adjacent pool. But before installing the solar system, ASU replaced the building’s existing BUR roof with a Sika Sarnafil EnergySmart Roof.

“It wasn’t that the Sun Devil Fitness Complex needed a new roof, but that it was installing a new solar system on top of that roof,” explained Don Mapes, senior consultant at Mapes Enterprises, Inc. of Prescott, Arizona. “ASU knows that the roofing system and solar system are separate systems, and it would be unwise to stack a new solar system on top of an old roof, especially when the cost of the new roof is small when compared to the cost of the solar system. Therefore they wanted a roof that would last 20 to 25 years and which would hold up to rigorous foot traffic when the solar system is maintained.”

"ASU has used Sika Sarnafil EnergySmart Roofs in many locations and likes the performance of the system and the 20-year warranty,” said Bob Backus, carpentry supervisor for ASU’s Facilities Development and Management/ Carpentry Services. “We also like the reflectivity of its light-colored membrane, and its light weight, which is important because of the weight of the solar piping.” 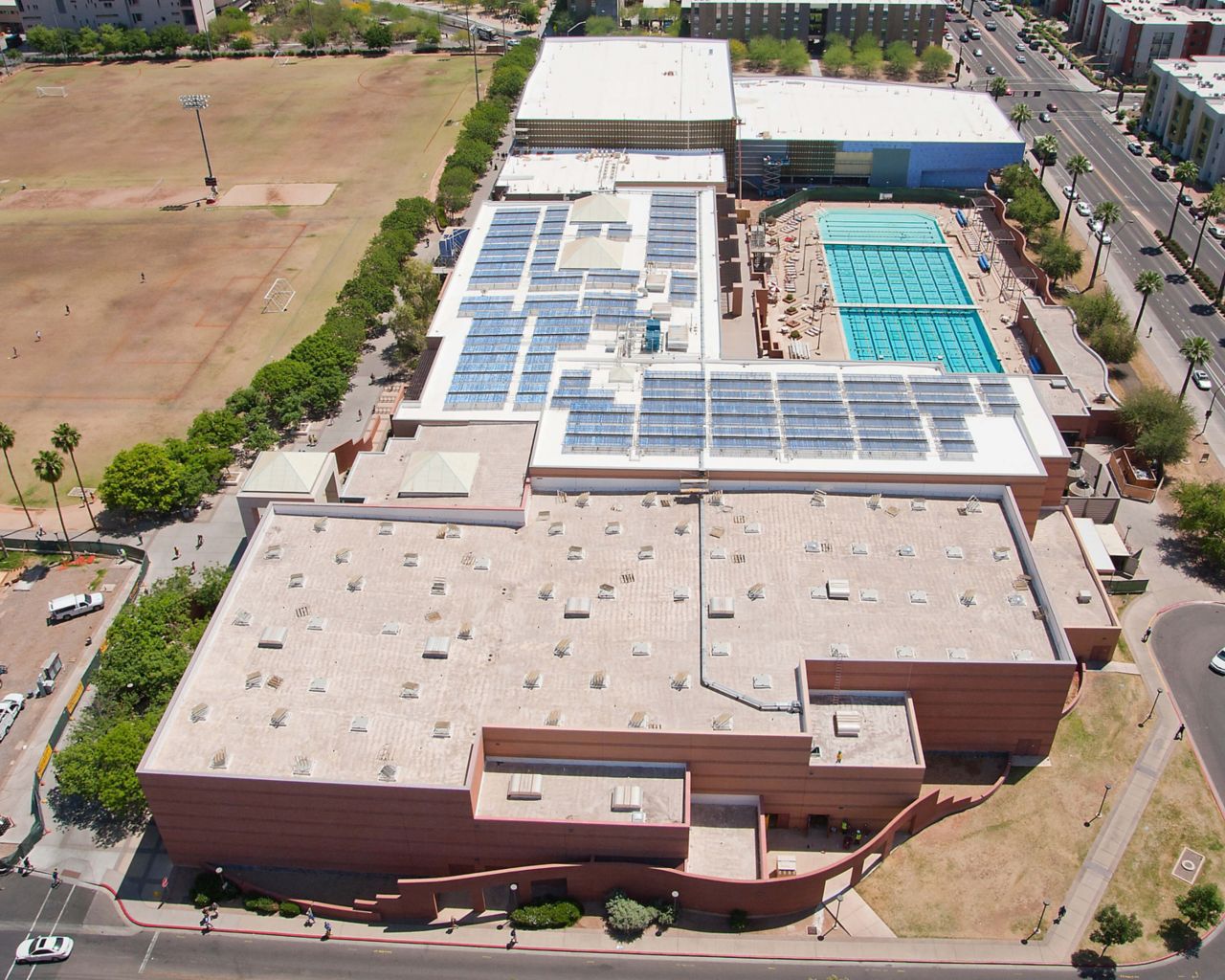 Click on the button below to get the project profile of the Arizona State University's Recreational facility and how a Sarnafil roof keeps the Sun Devils in the game.

DIVING INTO A DIFFICULT INSTALLATION

Star Roofing, Inc. of Phoenix faced several obstacles when installing the new Sarnafil EnergySmart roofing system. The biggest challenge was installing the 550 support members for the rack-mounted solar system. The support members were 19 ½” by 19 ½” steel plates with a 3 ½” diameter steel tube attached. “The roofing consultant did not want a lot of patches on the roof at the supports, so the supports were installed in the existing steel deck before the roof was installed,” stated Tomas Perez, superintendent at Star Roofing.

After a section of the existing roof was torn off, Ameresco, the solar contractor, marked the locations of 20 to 30 support posts. “It was critical that we put the support members exactly where they were supposed to go,” Perez commented. Star Roofing then had to cut through eight inches of the existing light weight insulating concrete to expose the steel deck. A 20” by 20” template was constructed and used to mark the hole sizes. After the holes were cut, the plates and tubes were attached to the deck.

“The holes needed to be filled level to the top of the insulation, but poured material could not be used because of the drying time,” said Jeff Klein, estimator at Star Roofing. “We ended up custom-cutting expanded polystyrene insulation to fit over and around the steel tube.”

Flashing all the pipe stands was tedious and time-consuming, but was made easier by the EnergySmart membrane’s flexibility and heat welded seams. “The Sarnafil membrane is easy to install and the crew works really well with it,” Perez remarked. “We find it is the best roofing product to use on applications like this.” He added that the Sika Sarnafil representatives were always available when they needed help. “We knew we could just call them any time and they would be there for us.”

Meeting the existing fire rating was another concern. The roofing consultant contacted USG engineers who suggested that a second layer of gypsum board be placed over each support location, which satisfied the UL requirement. As if these issues weren’t challenging enough, all of this work had to be done at night under floodlights. “There are students and faculty members coming and going into this building starting at 11:00 a.m. every day, and the building also has a very busy parking garage on a major city street,” Backus explained. “The only way to avoid inconveniencing everyone was to do the roofing work at night.” Added Perez, “Ladders, dumpsters and ground equipment had to be off the site daily, and loading of materials was only done on Saturdays to minimize the impact on the students.”

In addition, debris and dust had to be kept to a minimum so that adjacent swimming pools would stay clean and their filters would not be clogged. “We used a sun-screen-like material at the roof perimeters to retain the debris,” Mapes explained. “Fortunately the Sarnafil EnergySmart membrane is a clean membrane.

Despite all these challenges, the roof was completed on time and to everyone’s satisfaction. “Star Roofing did the same extremely high quality work on this project as they’ve done on other projects I’ve been involved with,” Mapes stated. “Everything was extremely well run and thought out, and they worked very closely with Ameresco, the owners and other parties involved. Star Roofing workers are very responsive and their work is second to none.”

It was this professionalism that earned Star Roofing First Place in Sika Sarnafil’s 2012 Contractor Project of the Year, Sustainability Category.

A ROOF THAT MEETS EXPECTATIONS

“The roof is doing great and there have been no problems,” said Perez. “We would definitely recommend the Sarnafil roof system again because we have a long, positive history with it.” Klein added, “We have a very high comfort level when we install Sarnafil EnergySmart roofs.” Backus said, “I would very much like to use the Sarnafil EnergySmart system again. It is lightweight, has better resistance to weathering and foot traffic, and I like the warranty and the relationship I have with the Sika Sarnafil people.”