A favorite saying among Dallas Cowboys fans is that Texas Stadium had a hole in the roof “so that God could watch his favorite football team play.” When it came time to build the NFL team a new home, Dallas Cowboys owner Jerry Jones “wanted the ‘hole in the roof’ to be replicated in the new venue down to the curves in the corners, because the Stadium roof hole is a prime branding element seen by millions of fans,” said Kevin Taylor, senior vice president at the architectural firm HKS, Inc. of Dallas.

But this is Texas, where everything is done on a “bigger is better” scale, so a simple “hole in the roof” on a standard stadium wouldn’t do. The new Cowboys Stadium in Arlington, Texas, is not only the biggest National Football League site ever built, with nearly three million square feet and capacity for 100,000 people, but it also features a retractable roof that is the largest of its type in the world. The roof measures 660,800 square feet and is supported by two boxed arches reaching 292 feet above the playing field, with each arch 35 feet deep by 17 feet wide. It takes nine minutes for two roof panels, each weighing 1.7 million pounds, to separate to open the roof. Some “hole” indeed! 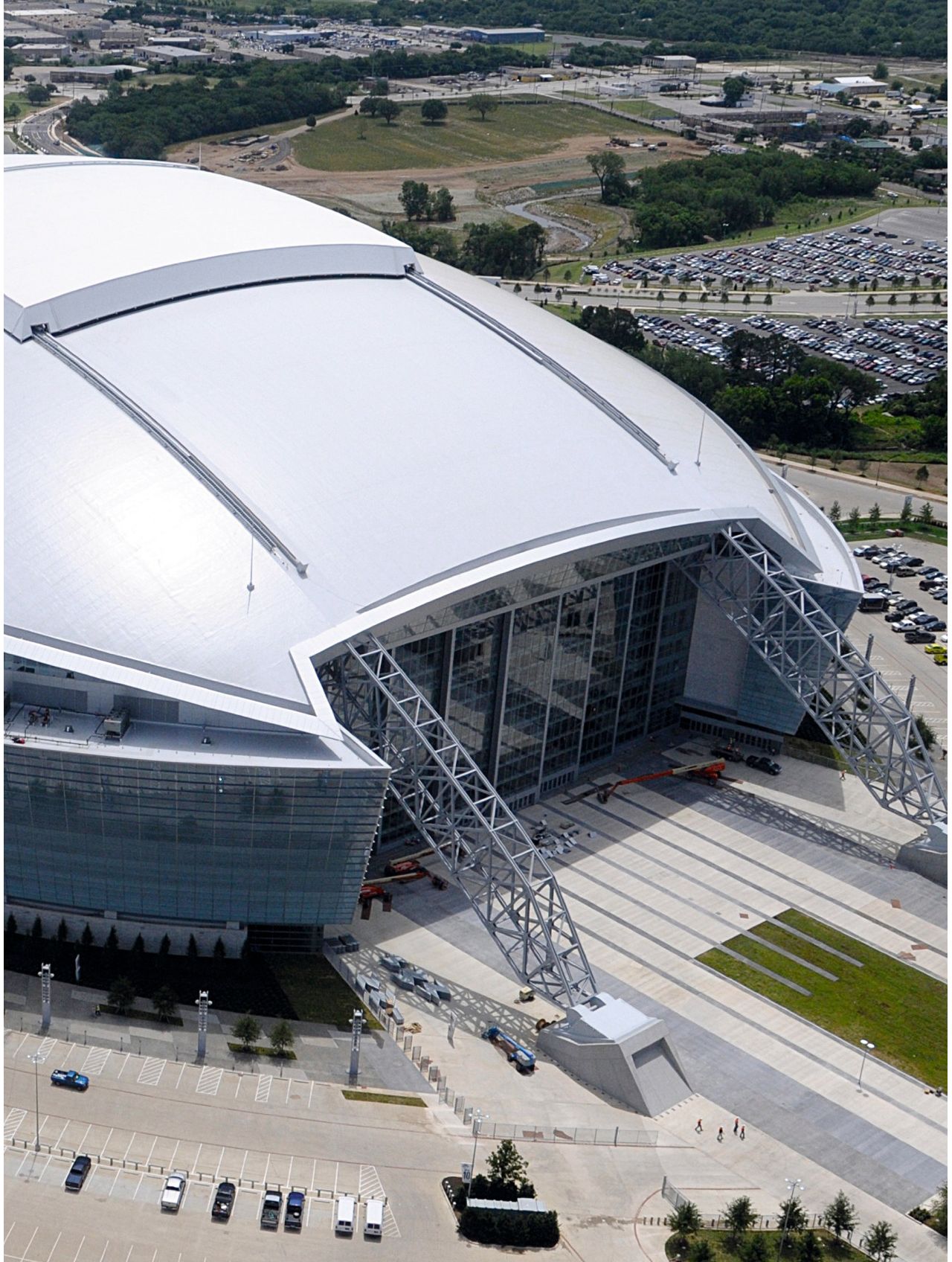 Taylor said there were a lot of “firsts” with this structure, so special care was taken when selecting the right materials for the different areas of the building, including its unique roof. “We knew a single-ply system would give us the flexibility and monolithic appearance we wanted, and that Sika Sarnafil has one of the most durable single-ply systems out there,” he explained. “We’ve used Sarnafil roofs on several other projects, including the American Airlines Arena in Dallas, and so we are very familiar with the quality of these systems.”

Mark Hickman, assistant project manager for Manhattan Construction Company of Dallas, Texas, the general contractors for the project, said, “Sika Sarnafil is viewed as superior roofing system, and the owner felt this was the best product for the job.”

“There were several challenges with this roof installation — such as figuring out how to secure the material,” Hickman explained. “KPost was ready to meet those challenges, and they delivered what we asked them to deliver.”

According to Thomas Williams, a roofing superintendent at KPost, the steep slope of the dome roof created numerous stocking issues. A 300-ton crane with a 380-foot boom was used for most of the project, yet despite this substantial reach, a hydraulic winch was also needed to pull materials to the top of the dome. All materials and tools had to be strapped down due to the forces of gravity and the high winds frequently buffeting the dome. “Eight individuals were needed to safely position the 400-pound rolls of Sika Sarnafil membrane. On an ordinary flat or low slope roof, this type of work can be easily accomplished using two people,” Williams remarked.

Stocking materials without a flat area of the roof on which to store them also posed a challenge. “We had up to four 10-men crews, with one crew dedicated entirely to stocking material on a daily basis,” Williams said. “The stocking crew was just keeping up with what was being installed that day, which was typically 80 squares of roofing.” 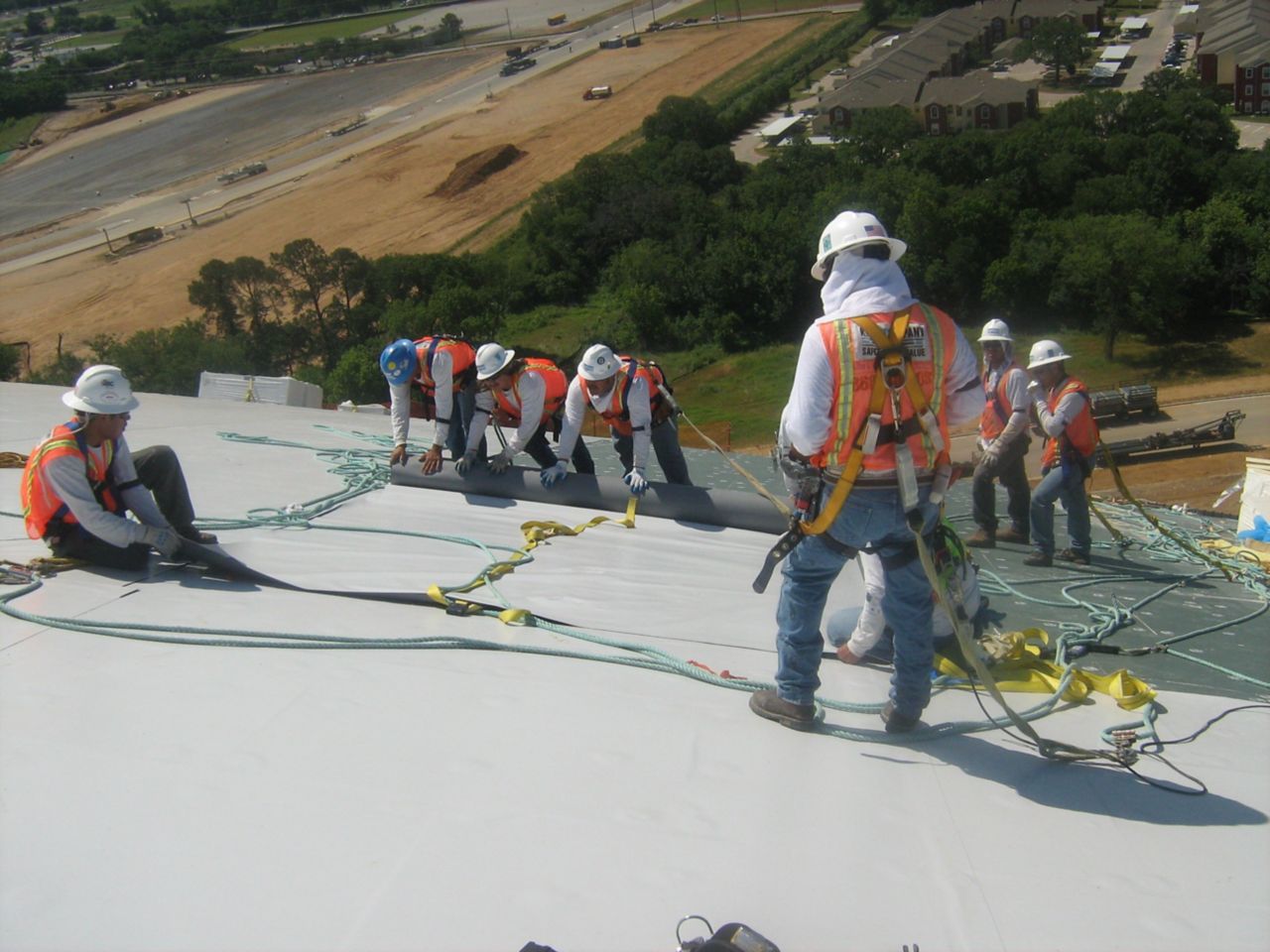 Williams added that safety was obviously another important consideration. “We had 60 individuals working 300 feet off the ground at times,” he explained. “All workers were tied off 100 percent of the time while working on the domed portion of the roof as well as on areas lacking guardrails or parapet walls. We used 60 safety lines reaching 240 feet in length, and a KPost safety monitor was onsite at all times.”

A SYSTEM THAT GOES THE DISTANCE

Fortunately, the Sika Sarnafil representatives and products made the installation a bit easier. In addition to the dome, the roof also included two mid-level roofs, two low level roofs, nine clerestory roofs and two adjacent buildings. The Sarnafil adhered, light grey membrane was installed, along with insulation and roof board, over concrete, metal and acoustical decks, and seams were hot-air welded to ensure a watertight seal.

“Sika Sarnafil is known for producing the best membrane out there, and the performance of the adhesive was very impressive,” Williams stated. “I also have a great deal of respect for the Sika Sarnafil representatives. The inspectors were thorough, tough when they needed to be while at the same time, always willing to find solutions to unique challenges on this job.”

Even though the Dallas Cowboys didn’t make it to the Super Bowl in its first year at Cowboys Stadium, most people involved with the stadium still feel like winners. In fact, KPost Company won First Place in Sika Sarnafil’s 2009 Project of the Year, Steep Slope Category. “The installation was fantastic and we are very happy with how the end product looks,” Taylor said.

“The roof is doing great and is a huge architectural feature of the building,” Hickman stated. “It turned out just the way the owner wanted it.”

“To be involved in one of the largest sports arenas in the world – and one that is for our home team, the Dallas Cowboys — has made all of us at KPost very proud,” Williams said. “This was a once-in-a-lifetime project due to the size, shape and steep slope of the domed roof. We believe this stadium is certain to become one of the most visible and recognized venues in the country.”

NEED HELP DECIDING A ROOF FOR YOUR NEXT STADIUM PROJECT? GET MORE INFORMATION: