It’s July 1970. The City of Montreal is preparing to host the XXI Olympic games, one the world will never forget. Working against the clock for the next six years, 10,000 workers would lay 12,000 pre-fabricated pieces of concrete to create the spectacular Montreal Olympic Stadium.

The finishing touches were added to the Stadium’s 275,000 sq.ft. roof just eight days before athletes from all corners of the earth flooded the arena to showcase their talents. Resembling a giant hand with curved fingers, the concrete tower and suspension cables above the roof’s membrane have made the Stadium an international icon.

But, 28 years after its construction, the membrane roof had aged beyond its years. Its original brown color had oxidized to appear green and heavy snow had created water seepage that led to decades of patching. The roof needed to be replaced.

“It wasn’t a luxury to restore the roof; we knew we had to do it,” said Architect Jean Martin, of Montreal-based Jodoin Lamarre Pratte & Associates Architects.

But, choosing the best membrane for the job was a challenge for stadium owner Regie des Installations Olympiques du Quebec (RIO). 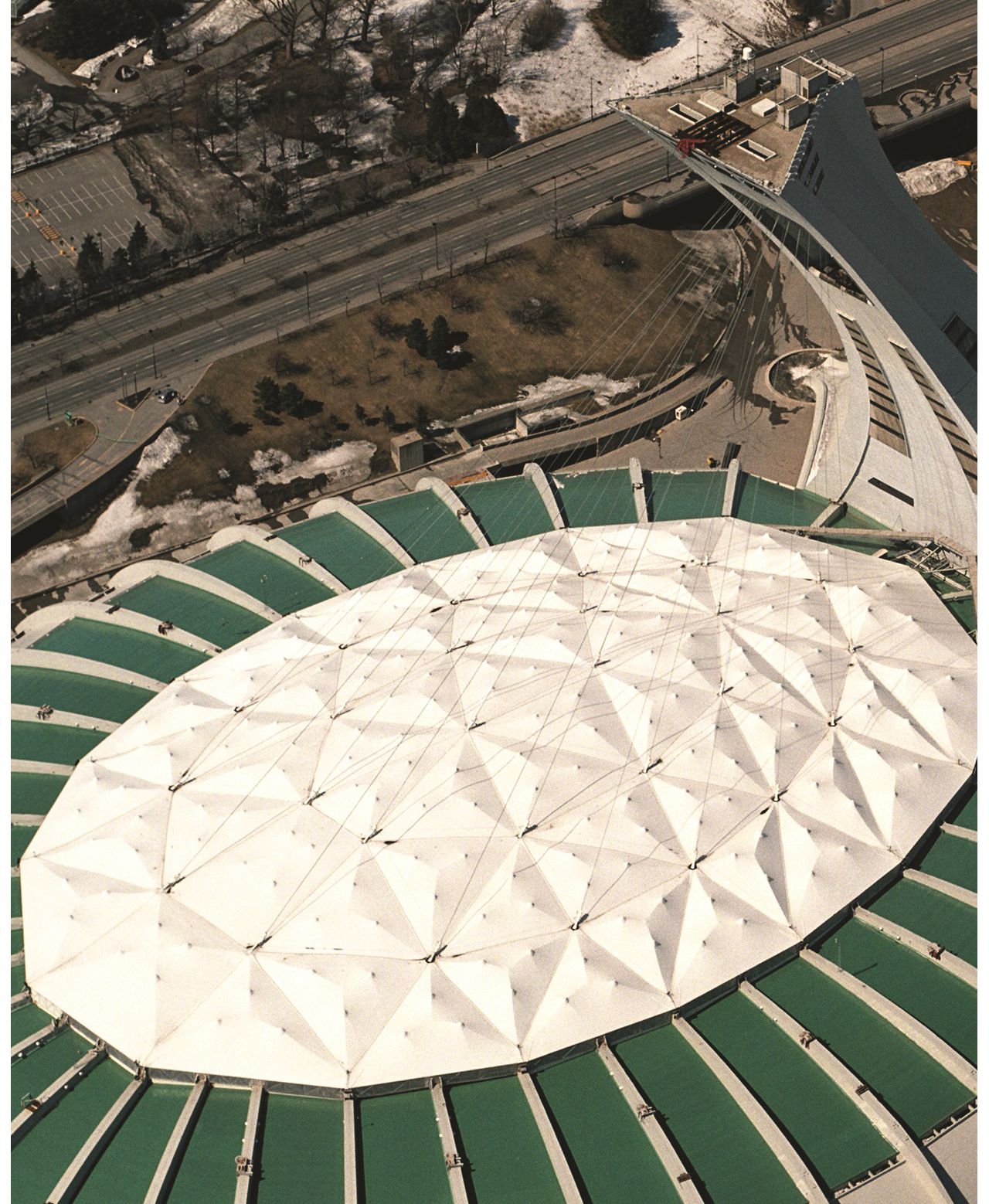 “The first requirement was to find an efficient membrane,” said Yvon Richard, project director for the Montreal Olympic Stadium. “We needed something that would not only ensure perfect water proofing of the rigid roof, but we also needed a material that would allow snow to slide off the roof.”

The solution was clear.

“A Sarnafil membrane was the logical choice with respect to the specifications and the balance between quality, time and cost,” said Claude Bellerive, owner of Charette, Quebec-based Groupe Cirtech Inc., the project’s roofing contractor.

“Sarnafil products are the most popular in the World and their life expectancy and durability have stood the test of time.”

Sarnafil was able to fabricate a custom membrane with 120-mil thickness that would allow snow to slide down the roof easily.

Aesthetics were another big concern.

“The look of the roof was very important because the Olympic Stadium is one of the most popular attractions in Montreal,” said Bellerive.

Because of the Stadium’s historical significance, the RIO wanted to create a replica of the oxidized roof. Sarnafil was able to match the color almost exactly with the creation of a custom color: Webster Green.

The Olympic Stadium is an integral part of Montreal’s international image,” said Richard. “Any work on this building has to be undertaken with the utmost respect for the original architectural integrity. It is in this spirit that the color of the new membrane respects the oxidized copper look of the original membrane.”

Construction on the Olympic Stadium’s roof began in the spring of 2003. Because the membrane couldn’t be adhered during Montreal’s winter months, the job took two summers to complete, with crews working from April to November.

However, even during the summer months the team’s schedule was cut short by one-third of the days due to scheduling. With 55,000 seats, the Stadium is Montreal’s premier venue for sporting events, trade fairs and concerts. Home to the City’s professional sports teams and major events, the facility needed to be up-and-running throughout the construction.

“Since the Stadium had to remain fully operational, the project’s contractor had to ensure a perfect coordination of activities so that the roof remained continually waterproofed,” said Richard.

“This required that the contractor have control of his resources in executing critical activities. Thus, before tearing off a roof section, workers had to ensure that they could re-roof the section before the next scheduled event, while also taking into account weather conditions.”

In between each of the roof’s curved “fingers” lie a total of 38 membrane-filled basins. Each was individually torn off, and in many cases the steel deck was also replaced. Then the Sarnafil G-410, 120-mil membrane could be applied. The structure’s height made this a challenge. Because of the wind at 130 feet in the air and the slope of the dome, crews had to be tied off for safety.

“The contractor’s work was hard because the roof is very high and in a curved form,” said Martin. “It was hard to get the materials onto the roof, strip the existing roof, take it down the side and finally replace the membrane. As they finished one basin, another team was already beginning the other. It was a very efficient and repetitive system.”

The result? A 29-year-old old icon looking as good as new.

“The Olympic Stadium is part of a Montreal citizen’s every day life,” said Bellerive. “Everybody is looking at the new roof for signs of improvement since our job completion.”

After two full winters of observation by Stadium officials, they are proud to report that the roof has met and exceeded all their expectations.

“The majority of snowfalls have naturally been evacuated by the snow sliding off, all within a period short enough to avoid excess accumulation,” said Richard who monitors roof inspections twice a year.

All involved expect this roof to be around for decades to come.

“We hope to get at least 30 years out of it,” said Martin. “Our goal was to do a good job and to create a roof that will last a long time because when you see a picture of Montreal around the world, you very often see a picture of the Olympic Stadium.”

Today this picture looks sharper than ever.

DOES YOUR ROOF NEED A FACE LIFT? GET MORE INFORMATION: