Just as a well executed fast break is appreciated in basketball, a quality roofing installation done under a tight deadline is also worthy of admiration. When Progressive Roofing of Phoenix was assigned the task of reroofing the Wells Fargo Arena at Arizona State University in Tempe, they had approximately 60 days to complete the 87,000 square feet installation. And if that wasn’t difficult enough, they also had to cut out 1,780 penetrations in the roof for solar panels that were being installed.

There were several reasons for such a tight deadline, according to Tom Urich, manufacturer representative for Sika Sarnafil and president of Section 7 Marketing. “There were financial incentives offered by the local utility for sustainable roofs and they were going to expire,” Urich explained. “In addition, work couldn’t start on the Arena until June, when the local high school graduation ceremonies were over — and the new roof needed to be completed before the fall school term started in August

Fortunately, the roofing system selected for the Arena was one that Progressive Roofing of Phoenix had a lot of experience with. “Sika Sarnafil is one of the better manufacturers of roofing membrane, and the system is a pleasure to put down,” said Steve Elsley, project manager at Progressive Roofing. “We always seem to have one or two Sika Sarnafil projects going on.”

Bob Backus, carpentry supervisor at ASU/Facilities Development and Management, said he selected the Sika Sarnafil system for several reasons. “We already have about 15 roofs with the Sika Sarnafil system, and they all are doing well,” he stated. “The Arena roof needed something that was lightweight and which could be easily flashed around all these penetrations. The Sika Sarnafil roofing system fit the bill.” 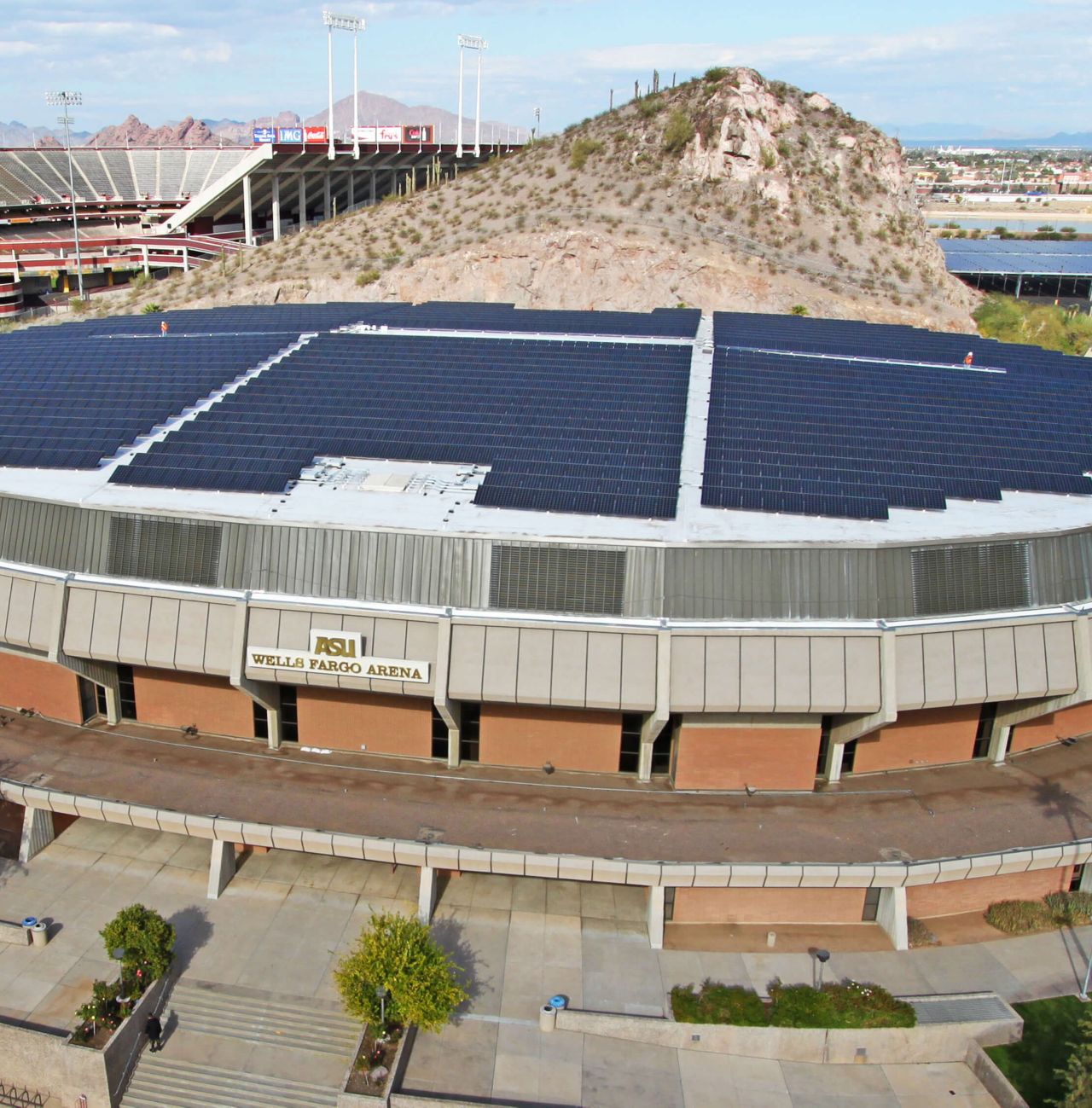 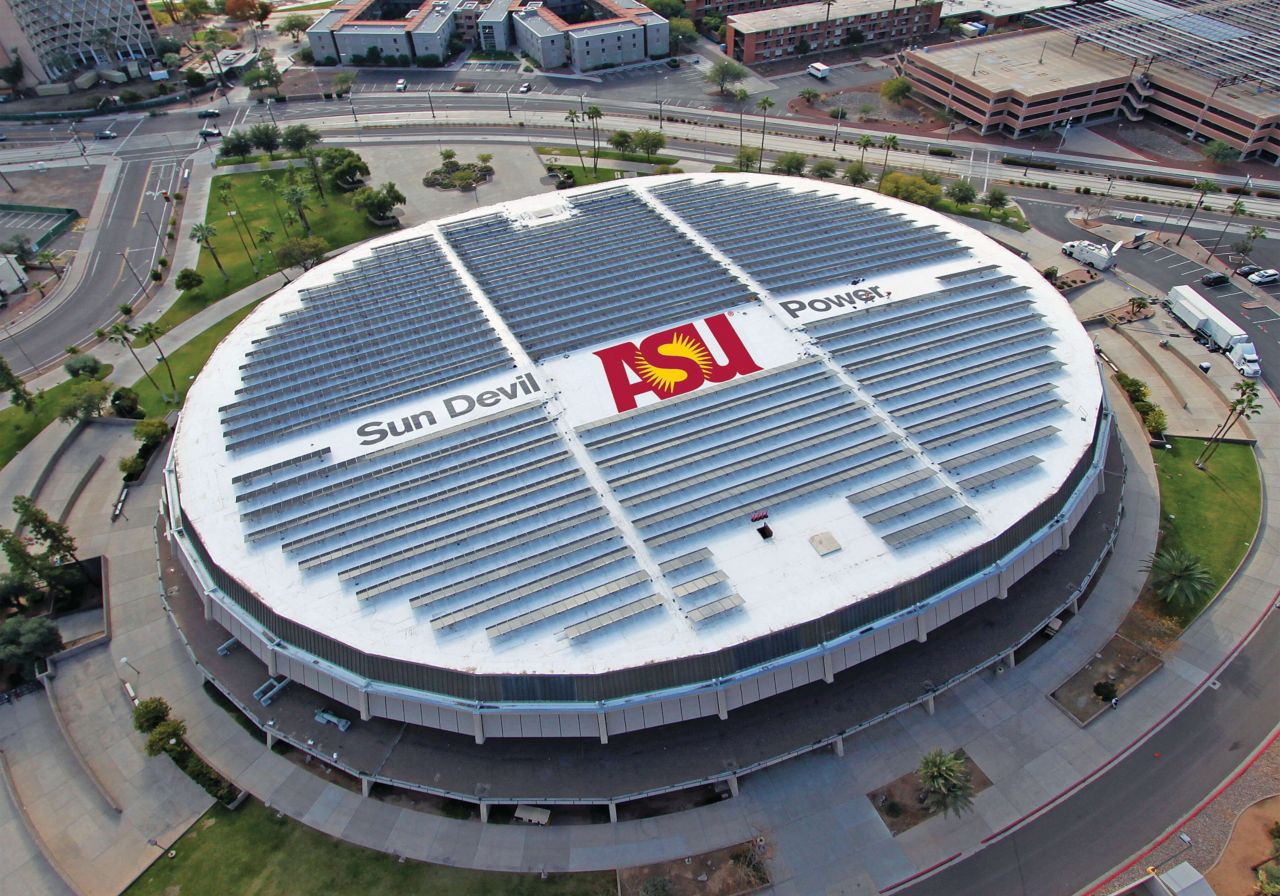 In addition to having a short time frame, the Arena roof installation also took place during the hottest – and busiest – time of the year. “Because of the Arizona heat and the events taking place at the Arena, we had to do all the work at night,” said Elsley. “It was also during monsoon season here, so we had several delays due to rain.”

No matter what the weather, the building had to be kept watertight during the entire installation, Elsley pointed out. “They were refinishing the wooden basketball floor at the same time, so we couldn’t have any moisture getting into the building,” he stated.

The 24-person crew also had to be tied off at all times, and deal with trades working on asbestos removal and the solar installation at the same time. “This was one of the most difficult installations I’ve ever experienced,” remarked Emerson Ward, project manager at CORE Construction, Inc., of Phoenix, the Construction Manager at Risk on the project. “It required a lot of collaboration and calculation. Fortunately we had the right roofing system with the right solar array.”

Another challenge, according to Backus, was access to the roof. “This building is the sports hub of the university, and is also right next door to the stadium,” he said. “That meant Progressive Roofing had to coordinate its schedule around traffic issues.”

REMOVAL OF THE BUR

The project began with the tearing off of the existing built-up roof, which Urich says was done “by chipping away one square foot at a time.” Elsley added, “We had to do a layout of how we were going to tear off the old roof and reinstall the new roof.”After the BUR was removed, Progressive Roofing made deck repairs, installed R-30 insulation, ½ inch coverboard, and the Sika Sarnafil membrane was adhered to the substrate. They then had to deal with the penetrations.

DESPITE THE TIGHT TIME FRAME AND CONSIDERABLE CHALLENGES, THE ROOF WAS COMPLETED

“After the new roof was installed Progressive Roofing had to cut 20 inch by 20 inch squares of the roof and insulation, pulling them out as big cubes,” Urich explained.

“Then the solar posts were installed, and the cubes were reinstalled and flashed.” This had to be done 1,780 times, making it “the most difficult installation I have ever seen,” Urich said.

Fortunately, Sika Sarnafil representatives were able to help with inspecting all the penetrations so that Progressive Roofing could keep to its schedule. “The representatives were great,” Elsley stated. “Whenever I had any issues they were there to resolve them quickly.”

Despite the tight time frame and considerable challenges, the roof was completed “on schedule and under budget,” according to Ward. “Progressive Roofing did a great job,” he added. “That’s why I consider them to be one of the best roofing contractors in the state of Arizona.” 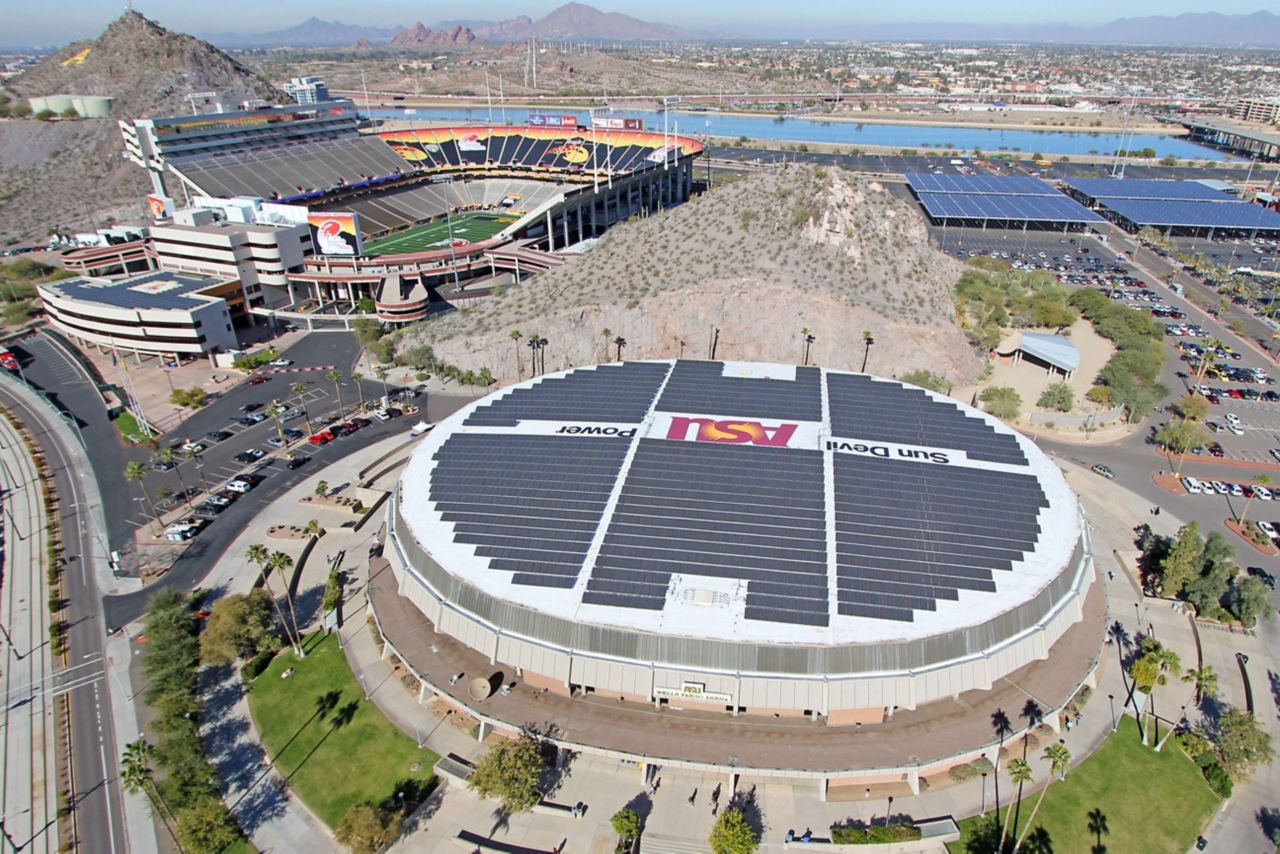 Progressive Roofing did exceptional work under the conditions,” said Urich. “They never had a leak -- even with 1,780 penetrations.”“I couldn’t ask for a better partnership than the relationships I have with CORE Construction, Progressive Roofing, and Section 7 Marketing,” Backus stated.It was this professionalism and attention to detail that earned Progressive Roofing Third Place in Sika Sarnafil’s 2011 Contractor Project of the Year, Sustainability Category.

A ROOF THAT SCORES

Today the roof is “doing excellently,” according to Backus. “There are no leaks and it drains really well.” “We get a lot of comments on how great the roof looks, especially with the logo,” Elsley added.

Sounds like, in the end, this roof was a slam dunk.