As any successful business student knows, investing in something that is tried and true is usually much smarter – and less risky – than going with something new and untested. So when Rutgers University decided to build the school’s first vegetative roof at its Business School in Newark, New Jersey, it wanted a roof with a proven track record of being durable, watertight, and long-lasting.

“Rutgers knew its students and professors were used to open space on the main campus, so they wanted to incorporate environmental space at the new Business School in Newark,” said Daniel J. Topping, IA, LEED AP, principal at NK Architects of Morristown, NJ. “An accessible green roof was one way to accomplish this.”

Green roof or not, the new roof had to meet Rutgers’s standard criteria for roofing projects, said Modeste Sobolta, AIA, principal at Elkin/Sobolta & Associates Architects(ESA) of Rutherford, NJ, roofing consultant on this project. This meant that the system must last at least 20 years and be easily serviceable. Adding to this challenge was the fact that there were actually three separate roof areas with different use requirements, Sobolta stated. Two upper roofs would contain an Extensive green roof with less than six inches of growth media and consisting mainly of low-growing herbaceous plants requiring minimal care and no watering. The lowest and larger area would have an Intensive green roof with a greater variety of plant life, mounded areas of growth media, and a pave red area for outdoor gatherings.

“As the roofing consultant on this project, we researched different waterproofing membranes and found that Sika Sarnafil had the longest history with a PVC membrane and still uses the same basic formulation it has used for 45 years,” said Sobolta. “We also liked that fact that the seams are heat welded to form one monolithic membrane. “Added Charlie Miller, principal of Roof meadow (formerly Roofs capes) in Philadelphia, the green roof designer of the project, “Sika Sarnafil has a long successful track record of green roofs both here and in Europe. And Sika Sarnafil provided a single-source 20-year warranty for the entire green roof assembly, which was important to Rutgers and FM Global Insurance, which underwrites the building insurance.” 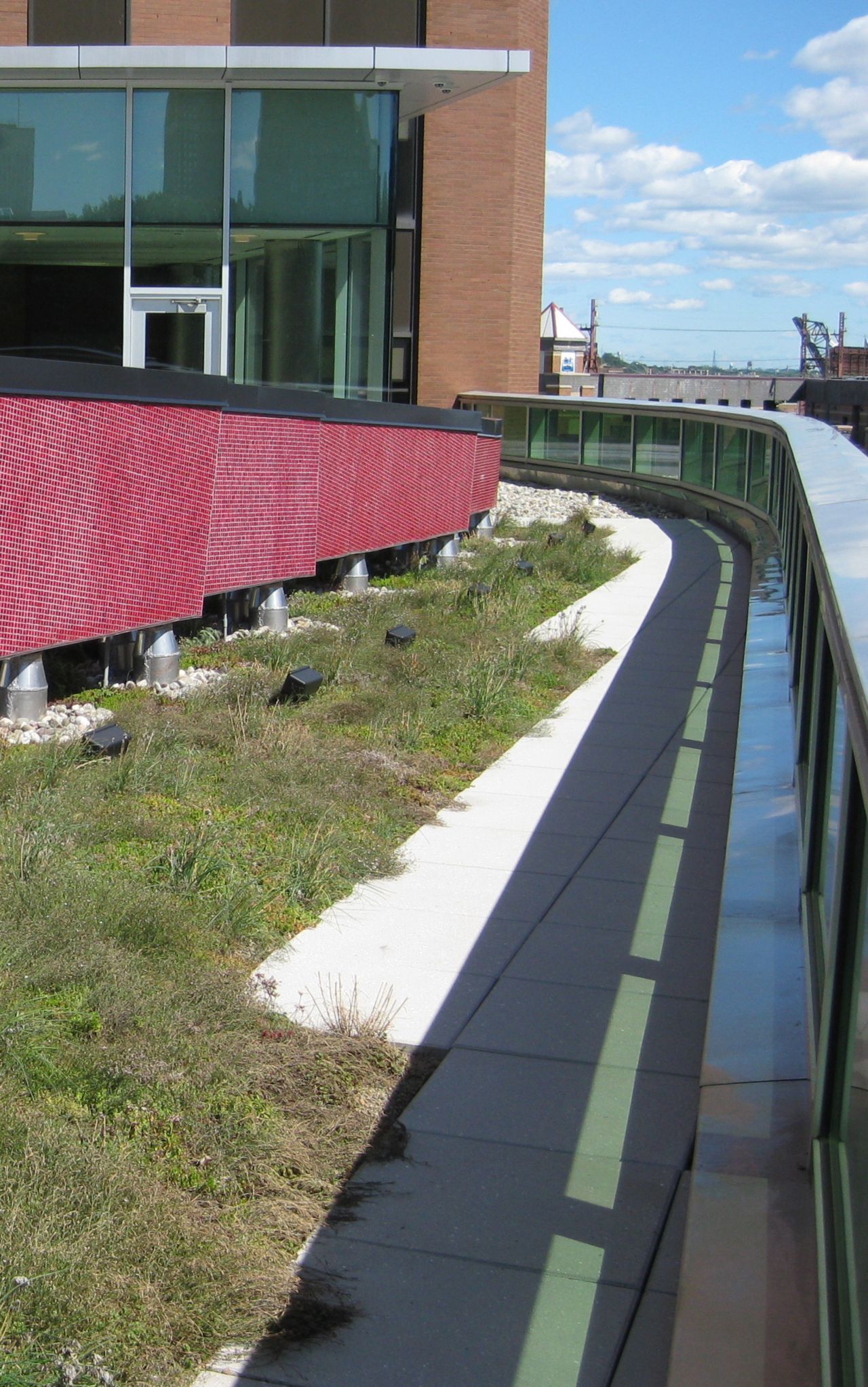 Working With a Curve

Installation of the green roof posed several challenges. Perhaps the biggest issue was dealing with the curved glass parapet wall on one side of the building, which was echoed with a curved wind screen on the roof. “The curves posed challenges when it came to laying out the insulation and membrane,” Sobolta stated. “There was also some extensive detailing in flashing with the glass parapet wall.”

The paver installation also was challenging. “The pavers had to be at the same elevation even though the roof was pitched for drainage,” Sobolta explained. “From the top it looks simple and straightforward, but that wasn’t the case at all.

“Frank Smak, estimator/project manager at Chris Andersen Roofing and Erecting Company of Perth Amboy, NJ, added that another challenge was tying into the existing building on one side. “We had to remove a lot of bricks and window casings,” he said. “There were also some challenging flashing details because we had to separate the existing wall with stainless steel flashing.

“This was a pretty complex and attractive green roof design,” Michael Furbish, president of Furbish Company stated. “We enjoyed doing this and are looking forward to doing the maintenance on it.”

Fortunately, there was a lot of teamwork involved with the roof installation. “Sika Sarnafil representatives were very helpful with the flashing details and other elements,” Smak remarked. “We also worked closed with ESA. It was a very good experience, despite all the challenges. I was happy to be involved in this project.”

Topping said, “Everything went very well, and there was very good quality control from the installer, inspector and consultant. It was a very unified architectural environment.”

“The success of a green roof depends on everything and everyone working together,” Miller pointed out. “Roof meadow worked closely with ESA on how we would incorporate all these different features –paving system, wind screen, vegetated and non-vegetative sections of the roof all in a very compact area. It made the engineering and landscape design more interesting and challenging!”

“ESA always does an excellent job for us, and this was no exception, “said David Yen, senior project manager for Rutgers.

It was this attention to detail and professionalism that earned ESA Second Place in Sika Sarnafil’s 2010 Roofing Consultant Project of the Year.

Today the roof is receiving rave reviews from Rutgers students, professors, and administrators, among others. Topping stated that while green roof technology is not familiar to all, which can seem intimidating to clients, “the procedures by Sika Sarnafil and the others involved made the process go quite smoothly. They were able to answer our technical concerns and meet the FM Global criteria. Best of all the result was a delightful and attractive roof.“

In the business world, the best gauge of a successful project is a satisfied, returning customer. “The roof looks great and there are no leaks, despite some major storms, “Yen remarked. “In fact, this project has been so successful that we would like to use the same Sika Sarnafil green roof system on other buildings in our Newark campus.”

Interested in How a Green Roof Can be a Solution for Your Next Roof Project? Get More Information: