“This building is very close to the water, so the steel standing seam metal roof really didn’t have a chance,” remarked Wade Garlin, AIA, NCARB and associate principal at Wiss, Janney, Elstner Associates, Inc. of Honolulu, the architect of record for this project. “The salt air contributed to corrosion of the exposed steel at cut edges of the metal roofing, creating a lot of rust at the termination points of the standing seam roof. In addition, the curved profile made the detailing eave, rake, and pipe penetrations very difficult for the sheet metal. The poor detailing coupled with the corrosion created leaks into the interfacing curtain wall system, which allowed water to travel down several floors.”

Garlin said that acrylic coatings were applied to the metal roof to solve the issues, but “the rust kept expanding and causing failure of the roof coatings.”It was clearly time to replace the roof. 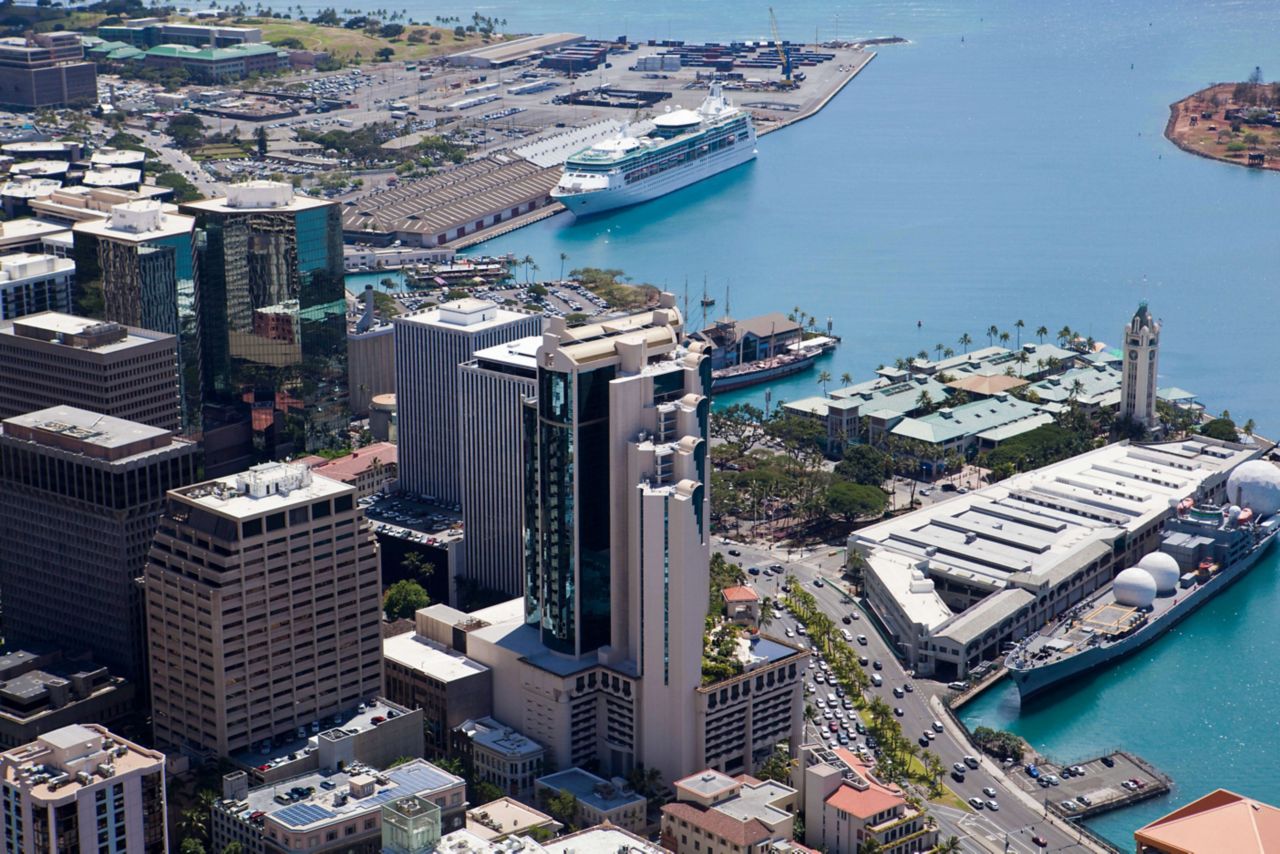 DÉCOR RISES TO THE OCCASION

“The Décor system sounded like the ideal product for this,” said Jimmy Ventura, AOAO property manager.“It would give us the waterproofing we needed, and still provide the same appearance as the metal roof.”

Garlin knew one system which would provide the same look as the original roof without the drawbacks of metal: the Sarnafil Décor Roof System, which combines Sika Sarnafil’s G410 thermoplastic single-ply roofing membrane with Décor profiles to give the appearance of a standing seam metal roof. It is one of the only roofing systems of this type that includes warranty coverage for the hot-air welded ribs that give roof the appearance of metal. “The membrane would be flexible enough to use on the curved shape of the roof, and the Décor profiles will give us the look we wanted,” Garlin explained. 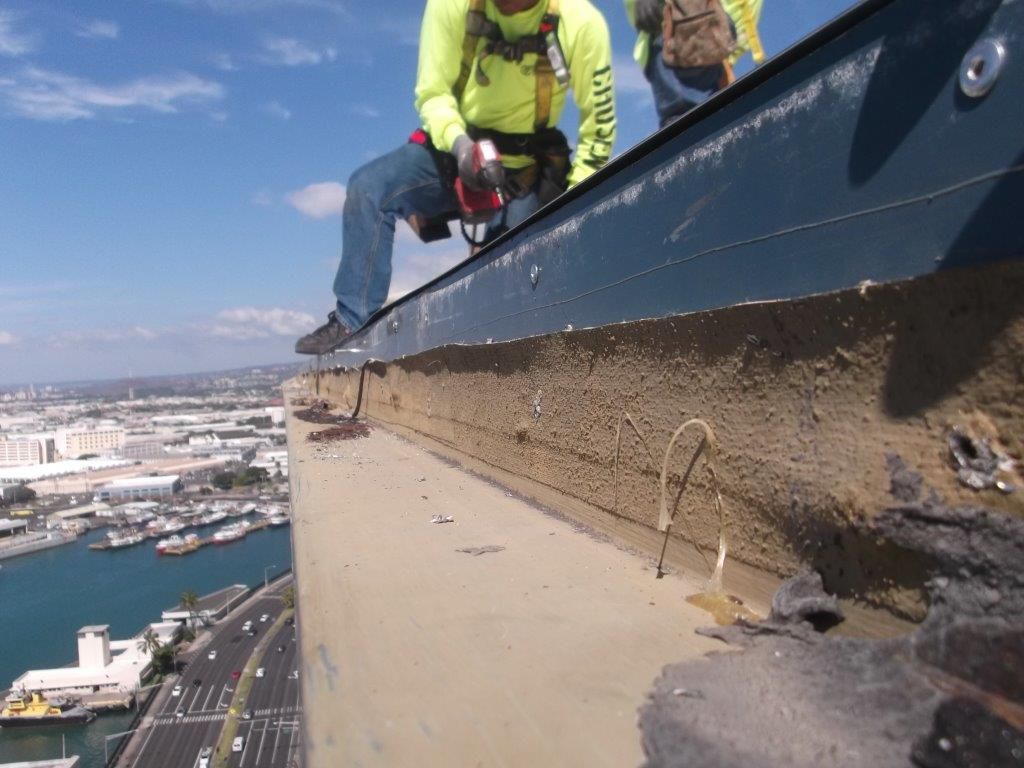 INSTALLERS UP TO THE CHALLENGE

Commercial Roofing & Waterproofing Systems, Inc. of Waipahu, Hawaii were given the daunting task of installing the new Décor system on the high rise building, which is subject to strong trade winds and salt spray. Fortunately, they were up to the challenge.

“We were working on floors 36 to 40, in a place where there are trade winds and winds that travel down the mountain and which can gust up to 40 miles per hour,” explained Larry Young, vice president/project managing estimator at CRW. “Safety was paramount. "We instituted a tailored safety program that included a high priority full fall arrest system and railings for the crew. All the materials and tools had to be carefully strapped down at all times due to the high elevation and high winds.”

CRW’s first task was to remove the five existing arched panels and create a customized fabricated curtain wall cap flashing that encapsulated the head of the curtain wall system for a watertight seal. “The clad flashing was a critical detail to prevent future leakage into the wall,” Garlin stated. “I like that Sika offers stainless steel with PVC cladding, which is a better option for salt air exposures.”

CRW then installed two layers of gypsum board, comprised of high performance fiberglass mats with a noncombustible gypsum core. This gypsum board was used as a barrier over the structural deck for a Class A fire rating and a substrate for installing the roof membrane. A custom colored tan Sarnafil 60 mil feltback single-ply membrane was then installed, along with the Décor ribs. 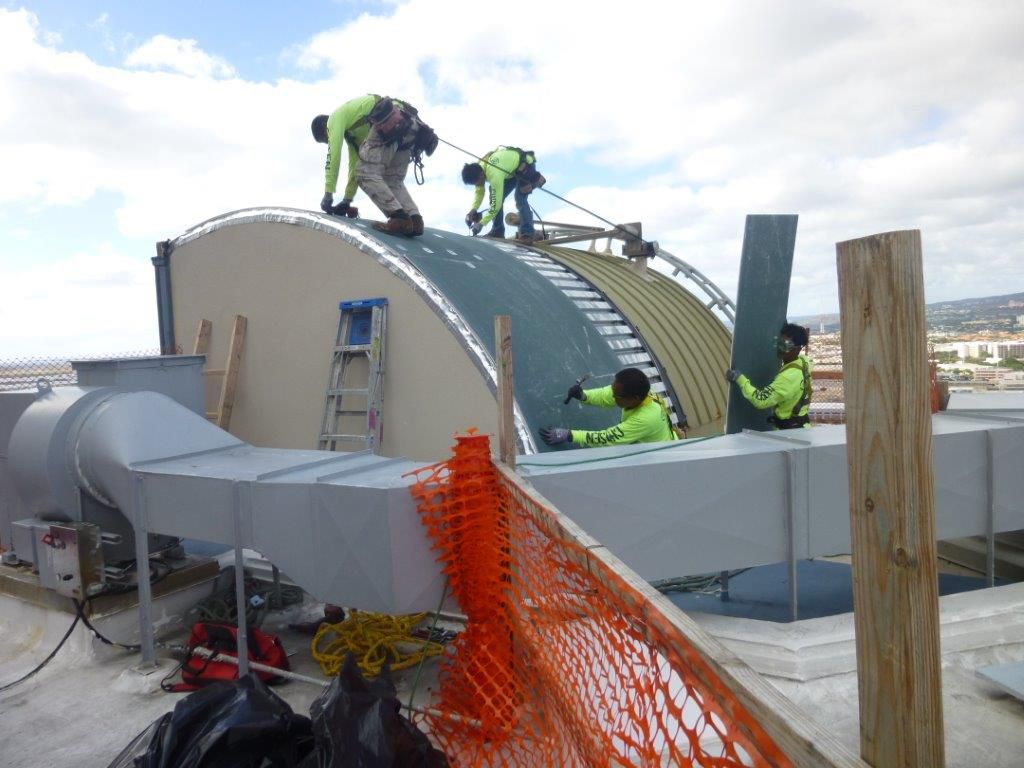 “The Sarnafil Décor system was an excellent choice for replacing the metal roof because it was easy to use over the curved portions of the roof, and the hot-air welded seams provide a monolithic roofing system,” Young said. “Plus the great thing about working with Sika is that their representatives are always helpful.”

“It was obvious that CRW knew what they were doing and found the roofing membrane easy to work with,” Ventura remarked. “I was very impressed with their work.”

It was this professionalism that earned Commercial Roofing & Waterproofing Third Place in the Sika Sarnafil’s 2013 Contractor Project of the Year, Steep Slope Category.

Since it was installed, the new Harbor Court Décor roof has gone through some very big storms without any problems. “We went through a full winter and some significant weather events, and all the previous roof related water leakage issues appear to have been resolved with the Décor system,” Garlin stated. “I would definitely recommend this system again. It was a great solution for this project and the owners.”

“I believe the Décor system was the best economical value,” Young commented. “It also came with a warranty, which is not always available on a building located so close to the ocean.”

INTERESTED IN A DECOR ROOF FOR YOUR NEXT PROJECT? GET MORE INFORMATION: