The Carver-Hawkeye Arena at the University of Iowa’s Iowa City campus has been the site of many winning performances, including that of its roof. The 48 mil, mechanically attached Sika Sarnafil roof had done its job admirably for 25 years, until an unusually severe storm damaged parts of the roof in the spring of 2006. Yet, like a dedicated athlete who refuses to give up the game, the aging membrane continues to perform today in its new, recycled rendition as roofing walkway membranes. Meanwhile, its Sika Sarnafil replacement roof continues the legacy of being a high performing player. 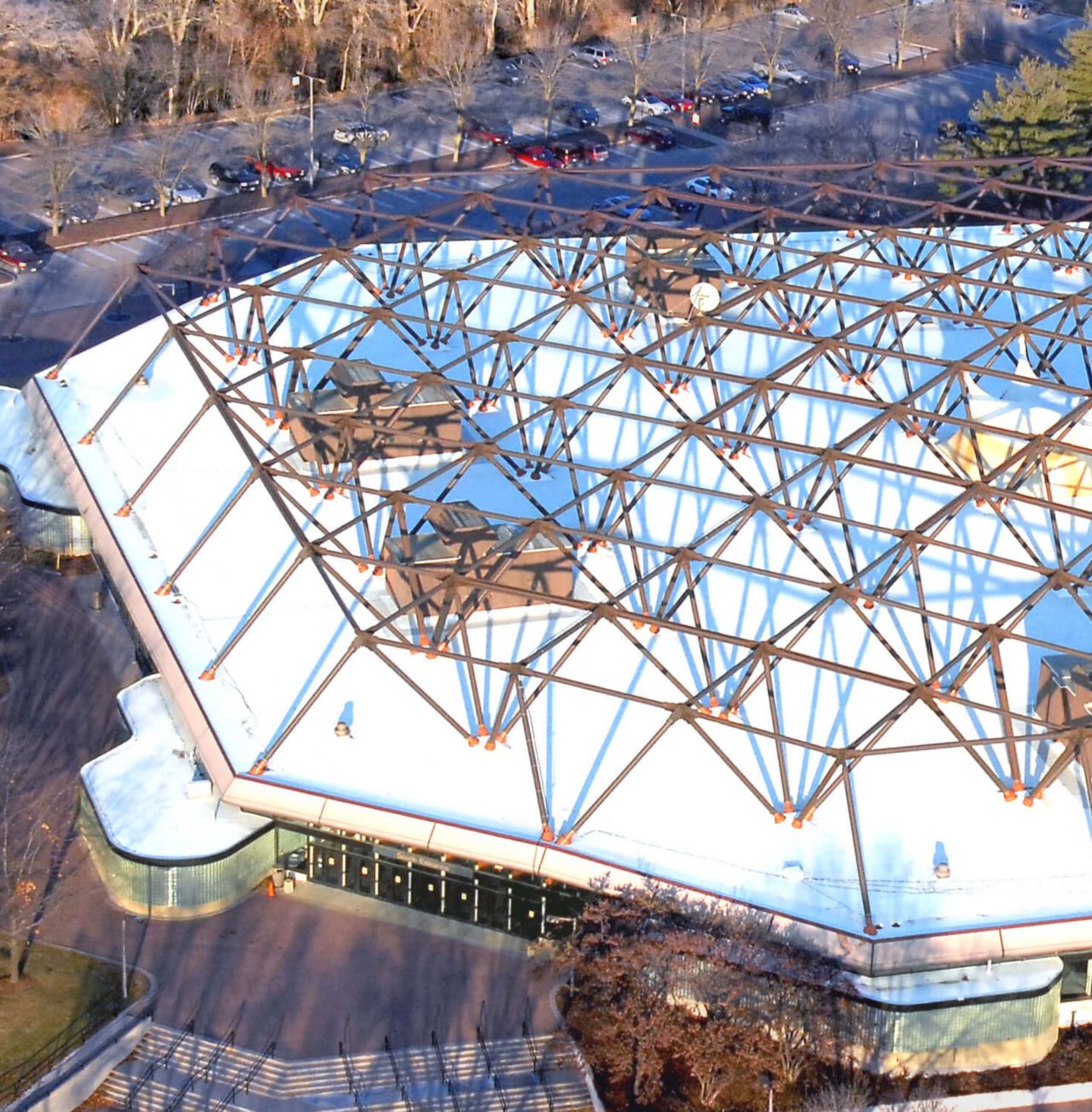 The Carver-Hawkeye Arena seats 15,500 for basketball, and also is host to numerous concerts, sports camps, commencements and other events. The arena’s original Sika Sarnafil roof was installed in 1981, and because of its advancing age, Jeff Hayes, 2006 engineer at the University of Iowa, had been planning to gradually phase in a new roofing system. That plan changed on April 13, 2006. “On that day we had a very severe storm with hail and tornados,” Hayes stated. “As might be expected, this did cause some damage to the roof.” Hayes suddenly found himself facing a very narrow time frame in which to replace the roof before the basketball season began in the fall.

The University of Iowa retained Benchmark, Inc. of Cedar Rapids, Iowa to perform roofing consultant services for the project. After evaluating various roofing options, Benchmark narrowed its recommendations down to the Sika Sarnafil system and one other single-ply roof.

According to Tom Irvine, Benchmark’s senior consultant and project manager, the recommendation was based on Benchmark’s favorable experience with Sika Sarnafil roofs and the longevity of the arena’s original SikaSarnafil roof system.

In the end, the Sika Sarnafil EnergySmart 60 mil, S327 mechanically attached system was selected for several reasons. One was that the new membrane could be effectively welded to the old Sarnafil® membrane during the anticipated phasing of the roof installation. Another reason was that the roofing contractor, CEI Roofing Texas of Dallas, thought Sika Sarnafil’s bid was very well presented. 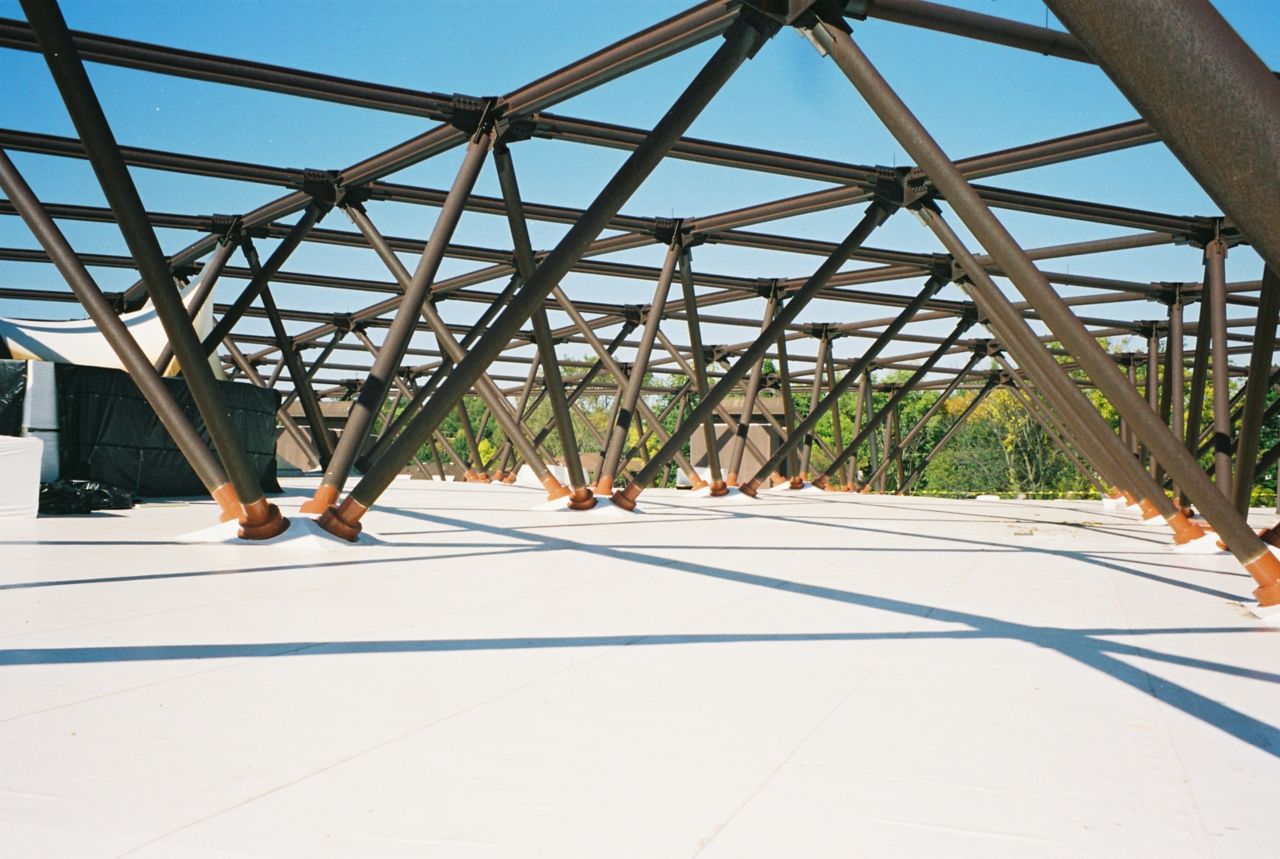 A NEW CAREER FOR A RETIRING PLAYER

Prior to the start of construction, Sika Sarnafil technical sales representative Ken Baragary came up with a proposal for the old membrane. Instead of sending it to a landfill, why not recycle it for use in a new Sika Sarnafil product? Hayes liked the idea. “The university is always looking for opportunities to recycle materials that would otherwise end up in the landfill,” he said.

CEI president Byron Warnick stated that while recycling the membrane might add some steps to the installation of the new roof, CEI Roofing was still enthusiastic about the idea. “This was a great idea from Sika Sarnafil — they really are the pioneers in recycling old roofing membranes and we found this very exciting,” he explained.

Like a star basketball player, CEI Roofing had to not only be skilled, but also fast. “We only had two months in which to do the job, because the work had to be completed before basketball season, ”Warnick explained.

Due to the short construction window, it was anticipated that this project would not be completed before winter, thus requiring Phase 2 work to be completed in the spring of 2007. Due to CEI’s aggressive scheduling, however, the phased approach was not required. CEI completed the entire project in one phase, before cold weather arrived.

“We did not think any company could complete the entire project before cold weather arrived — which is why this project was set up for two phases,” said Hayes. “The fact that CEI Roofing was able to do this in one phase is a testament to their proficiency and professionalism.”

The crew began by removing the old membrane and replacing the insulation around the outer edges of the roof. Most of the remaining insulation, however, was in very good shape and could be reused. Gypsum roof board was mechanically fastened over the insulation, and the Sika Sarnafil EnergySmart membrane was then installed.

While the new Sika Sarnafil roof was being installed, the old roof was being rolled up and sent to BES Industrial Services, Inc. of Cedar Rapids, Iowa, where the membrane was ground up. However, despite the age and service of the 25-year-old roof material, it still proved to be a resilient player.

“This was pretty tough stuff — a lot tougher than any other PVC material we’ve ever processed,” said Todd Pender, plant manager at BES Industrial. “Most plastics you hit and they shatter, but this one was flexible and in great shape — especially for having been on a roof for 25 years!”

Both the new and old Sika Sarnafil roofs scored high points among those involved with the project. “My experience to-date with Sika Sarnafil has definitely met or exceeded all expectations we had for them, “said Hayes. Irvine added, “Benchmark is impressed with the finished roof system, and the efficiency and workmanship exhibited by CEI Roofing.

”Warnick was especially pleased with the recycling aspect of the project, “I think this will be something that owners will want to be a part of.” Added Hayes, “It’s a win/win situation for everyone.”

INTERESTED IN RECYCLING YOUR CURRENT ROOF? GET MORE INFORMATION: